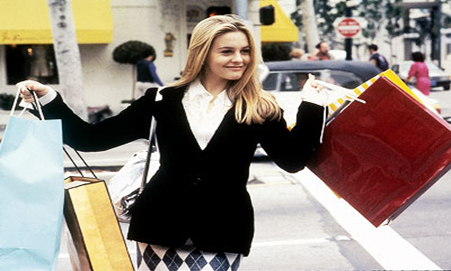 Throughout the past week, Vulture has been taking a close look at iconic pop-culture films/TV shows/etc via their micro oral histories series.

Cher in the red dress, Tai googly-eyed over Elton, Murray getting his head shaved; there’s just too many awesome parts of this scene/movie, entirely.

Some highlights, including lots of love for the late, great Brittany Murphy:

Silverstone: I love the suck and blow thing — am I saying that right? I love that, when Jeremy gets in there and tries to snag a kiss. I just love it. [laughs] I definitely hadn’t heard of [the game before the movie]. I’ve never heard of it again since then.

Silverstone: I love when Brittany Murphy does her little “rolling with the homies” [hand gesture]. It’s so sweet. She was so special for that role and just adorable and lovely and brilliant. It’s so weird to think she’s not around anymore. It seems very abstract. [Murphy died in 2009.]

Faison: She had that spark, you know what I mean? I honestly believe that’s why everybody remembers the song because one, she’s so cute when she sings it. Two, you didn’t expect that voice to come out of that girl when she sang. So when she does that line, it’s like, “Holy cow, she can sing?”

Faison: We had a blast making that project. So the party scene, it literally felt like a party.

Coolio: I remember going to the premiere — they had it on the beach — and basically getting white-boy wasted.

Ugh, if only they got Mrs. Geist and Mr. Hall! And of course, the question we’re all wondering: Where is “Ambular” now?

Oh well…looks like we’re just gonna have to make a cameo at the Val party!

Would You Have Sex With Paul Rudd For $1?