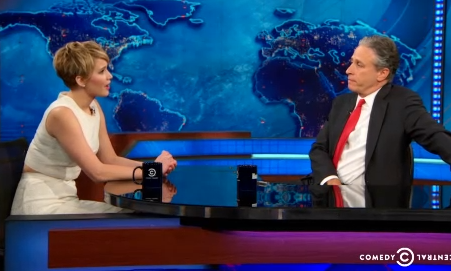 The Internet has an obsession with Jennifer Lawrence. Though it’s creepy and awful, she should probably soak it up because all it takes is one nervous acceptance speech and she’ll be the Most Hated Women in America.

Proving that Lawrence can do or say no wrong, on last night’s Daily Show, she and Jon Stewart chatted about all the fanaticism. Lawrence responded with all of the self-deprecating comments that everyone loves her for, and then moved on to criticizing, jokily, Stewart’s interview style, calling him weird and continuously reminding the audience that Stewart was unprepared. An awkward seven or so minutes later, the Internet was alight with “Oh My Gosh, Look How Lawrence Schooled Stewart” posts.

Stewart isn’t necessarily known for his probing skills, but he steps it up when appropriate—just check out The Week’s list of “Jon Stewart’s 5 most hard-hitting interviews” if you want some freshening up.

Lawrence’s comments weren’t a big deal; the two got along just fine. Maybe Stewart didn’t have the foresight to see her movie or read the book—maybe he did. But really, who cares? Stewart’s audience isn’t tuning in to catch up on what’s happening with District 12 and all the injustice in Panem, amiright? Lawrence vs. Stewart is a silly war. Let’s save the online superstar battles for Kanye vs. Zappos/Kimmel/Obama.

You can watch the video here: