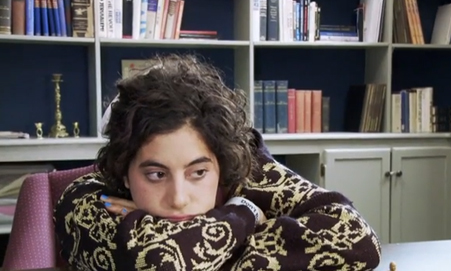 Move over Jenny Slate, there’s a new web series in town. ‘Dude, Where’s My Chutzpah,’ which premiered this week, features Jessie Kahnweiler on an untraditional quest to find out what it means to live Jewishly (beyond, you know, saying L’Chaim and eating pastrami).

Her job prospects are slim (one regular gig involves dressing like a pickle with an ‘Eat me, I’m kosher’ t-shirt’), her boyfriend is a total dick, and she wore a shiny one-shoulder dress to her grandmother’s funeral (where she eulogizes that her grandmother would be thrilled that she finally was in the same room as so many single Jewish guys). Girl’s a mess. But the news that her late grandmother left her a significant sum of money—with the stipulation that she spend a year living a Jewish life—starts her on an unconventional, and surprisingly entertaining, journey.

The project is Kahnweiler’s brainchild, and her Six Points Fellowship project. The 28-year-old filmmaker has been living in Los Angeles for the last seven years, working in post-production, including a stint at J.J. Abram’s Bad Robot Productions, and writing and filming her own projects on the side (like the web short Baby Love, which features Anchorman’s David Koechner as the older guy who dumps her for being too young, and stars a random baby as the guy she dates next).

Why is this project different from all her other projects, though? This one’s pretty real, she told me. Kahnweiler was raised “really really reform” in the suburbs of Atlanta, GA—she “got bat mitzvahed, ate bagels, went on Birthright and made out with an Israeli dude”—and very much like the version of herself she plays in the series, saw Judaism as her grandmother’s religion, and not her own.

The main question for Kahnweiler: “How would I go about finding my Jewish identity in an authentic way that actually had me giving a shit?”

In Episode 4, Kahnweiler tries out Orthodox Judaism. “That was totally based on my experience being in Los Angeles and going into those communuties and making an ass out of myself and having to ask 12-year-olds what to do,” she explained. “It’s not bullshit.”

She’s like a more Jewish Lena Dunham (“Is it because I’m chubby?”), in the way her ‘Dude, Where’s My Chutzpah’ character exudes an affected, entitled naiveté similar to Hannah, Dunham’s character on Girls. But like Dunham, Kahnweiler is giving legitimacy to the questioning and the curiosity of this 20-something (Jewish) woman, positing that there is something real and important about those struggles, no matter how trivial and self-absorbed they may seem.

“She certainly opened up the door on some level,” Kahnweiler told me. “It was like well, ‘It’s going to be my journey and my story and yeah, I have hair on my chest and love handles, but why shouldn’t I be in it?”

Check out the web series here (new episodes premiere on Thursdays at 10 a.m. PST), and let us know what you think.