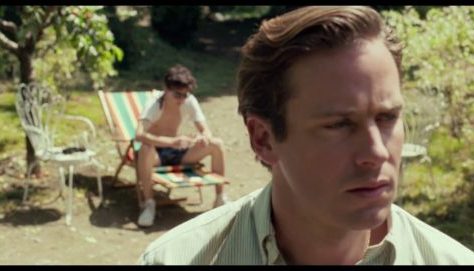 You may have already heard plenty about Call Me By Your Name, the upcoming Luca Guadagnino film. There’s original music by Sufjan Stevens, Oscar buzz, and even some (misplaced) controversy. But you may have missed that this film is not only a queer coming-of-age romance— it’s a Jewish one.

Call Me By Your Name is based on a 2007 novel of the same name by André Aciman about Elio, a teenager in Italy in the 1980s who falls for Oliver, a young academic who comes to stay with his family over the summer. Both the family and guest are Jews, a minority in a very Catholic country.

This shared bond is one of the things that brings Elio and Oliver together; Elio is enchanted by how Oliver wears his Jewishness on his sleeve (or literally, on his chest, in the form of a Magen David), and he tries to emulate him, despite the fact that his family describes themselves as “Jews of discretion.” Elio even wears his own Star of David (“My Star of David, his Star of David, our two necks like one, two cut Jewish men joined together from time immemorial,” writes Aciman in the original novel). In the novel, at least, this has a mixed effect for Elio:

Judaism never troubled [Oliver] the way it troubled me, nor was it the subject of an abiding, metaphysical discomfort with himself and the world. It did not even harbor the mystical, unspoken promise of redemptive brotherhood. And perhaps this was why he wasn’t ill at ease with being Jewish and didn’t constantly have to pick at it, the way children pick at scabs they wish would go away. He was okay with being Jewish.

In the novel, despite his secularity, Elio understands his own sexuality through the lens of Jewishness:

I remembered the scene in the Bible when Jacob asks Rachel for water and on hearing her speak the words that were prophesied for him, throws up his hands to heaven and kisses the ground by the well. Me Jewish, Clean Jewish, Oliver Jewish— we were in a half ghetto, half oasis, in an otherwise cruel and unflinching world where fuddling around strangers suddenly stops, where we misread no one and no one misjudges us, where one person simply knows the other and knows him so thoroughly that to be taken away from such intimacy is galut, the Hebrew word for exile and dispersal.

How Aciman writes Jewish characters is reminiscent of his personal essays about Jewishness; he treats the subjects with ambivalence and great poignancy. Aciman was born to a Jewish Egyptian family, living as a tiny minority until the family was forced to leave when the writer was a teenager.

As far as the film is concerned, much of the cast is Jewish as well. Armie Hammer, of Jewish descent, plays Oliver, and Jewish-American newcomer Timothée Chalamet plays Elio. Elio’s father is played by Michael Stuhlbarg of A Serious Man.

It’s exciting that an Oscar film for this season is also a Jewish queer one. The movie doesn’t come out in wide release till November, but you can enjoy the decadently Sufjan Stevens-laden trailer in the meantime (see if you can spot the Jewish star necklace):