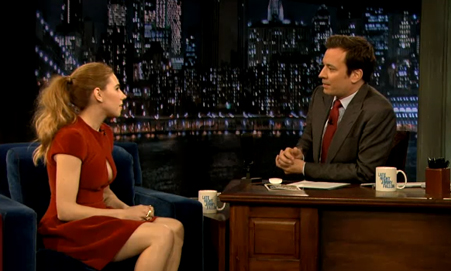 Girls actress Zosia Mamet celebrated her 25th birthday just like you did—with a cleavage-bearing visit to Late Night with Jimmy Fallon before heading to a production of the off-Broadway play Really Really, in which she plays Leigh.

Fallon explained to the audience who Mamet’s playwright father is (some guy named David), and asked if he was supportive of her acting career. “Very supportive,” Mamet replied. “He loves it. Totally. Couldn’t ask for more from that man.”

“He is absolutely psyched,” she continued. “It was pretty obvious from day one that I wasn’t going to college—my little brother got the smarts in the family. I told him I wanted to act and that I was skipping out on school and he said, ‘Thank God one of my children is finally listening to me.'”

“I lucked out for sure,” she added.