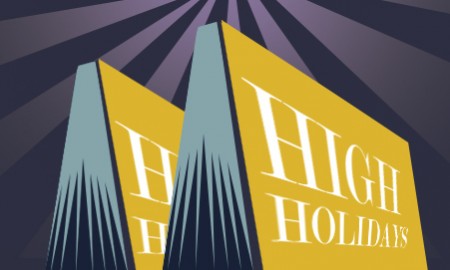 Last year, I compiled a list of literature I felt appropriate for the introspective nature of the High Holidays. Throughout the year, I shul hopped my way around the tri-state area and found a surprising form of synagogue worship: reading throughout the service. Everywhere I went, I found a steady group of people who came to synagogue to read. While some might find this offensive, I found it encouraging. The shul environment is tranquil, calm, and conducive to letting words wash over your mind. In that vein, here are eight more books—new and old—that I find transplant me to a more receptive mindset during these reflective days.

Scenes From a Village Life, by Amos Oz

Oz, the elder statesmen of Israeli writers, writes this slim, beguiling state of the union address in the form of interconnected short stories about a fictional town in Israel. Death, decay, and loss pervade these stories that manifest an Israel uncertain of its past and frightened of its future. Yet despite the many dire situations, Oz evinces an infinite love for his homeland, albeit a homeland he sees as lost. Beyond their statement about the health of Israeli culture, these beautiful stories confront essential questions of family, loyalty, and the nature of commitment.

Yalom is an interesting species of writer. Born Jewish, turned atheist and secularist, Yalom still displays an abiding spirituality in his embrace of existential thinking in psychotherapy. In his most famous book, Love’s Executioner, Yalom shares 10 stories from his therapeutic practice that allow the reader to explore personal fears and insecurities. The introduction itself, a pitch perfect summation of existentialist therapy, justifies the hefty price of the book.

Sense of an Ending, by Julian Barnes

Barnes’ meditation on memory and missed opportunities will entrance all types of readers. In this short book full of crystalline prose, Barnes weaves the story of Tony, a man in his sixties, looking back and questioning the tidy narrative of his life. In a time devoted to reflection, seeing Tony mine his experiences to understand how he got to the exact point he’s now at will open even the most cynical heart to the possibility of redemption.

One of the legends of 20th century fiction, O’Connor tends to get more notice for her short stories than for her novels. With her characteristic charismatic southern humor and darkness, O’Connor explores religious crises in an often surprising manner in her first novel. Though rooted in Christianity, the story of a young person returning home only to find himself struggling with his religious heritage will appeal to people of various persuasions. O’Connor, in her often mysterious way, makes the case that those who rail against God and those who live with doubt are some of the most religious people.

Robinson represents one of the last bastions of religious writers. One of the best writers of our generation, she manages to combine some of the finest writing with the deepest religious sentiment. In Gilead, an aging pastor writes a letter to his son about the nature of faith, devotion, and the challenges of modern life. Robinson’s portrayal of religious life represents a true understanding of spiritual struggles and motivation. Home, a sequel of sorts to Gilead, tells the story not from the perspective of a dying pastor, but from the perspective of the prodigal son returning home. Any of her books, whether essay or fiction, would foot the bill for these introspective days, but this one-two punch captures the range of today’s religious experience.

The Convert: A Tale of Exile and Extremism, by Deborah Baker

Baker writes a stunningly brilliant biography of Maryam Jameelah, previously known as Miriam Marcus, a secular Jew who converted to Islam and became a famous writer of anti-American books in Pakistan. Baker weaves Jameelah’s story from her letters to her parents and others, but eventually Baker widens the book’s scope to investigate the charismatic leader that guided Jameelah’s transition, Mawlana Mawdudi, the divide between Islam and the West, and ultimately, an exploration of Baker herself. She questions her own assumptions about life, civilization, and the limits of knowledge—all while pushing the boundaries of a biography considerably beyond what we may expect from the genre.

In the Valley of the Shadow: On the Foundations of Religious Belief, by James Kugel

Kugel, a renowned biblical critic, explores his beliefs through his experience with cancer. Never one to shy away from the struggles of contemporary Judaism, Kugel seeks, with the mind of an academic and the heart of poet, to find “the starting point of religious consciousness.” He also takes the reader on a journey into the depths of religious experience.

We focus so much on the Jewish experience in the Holocaust that we risk forgetting the larger context of the war. Binet masterfully explores a secret mission to assassinate Reinhard Heydrich, the Butcher of Prague, while considering the nature of courage, heroism, and meaning—crafting an exciting, dramatic, true story. Binet also sheds light on more recent histories of war, genocide, and heroism, acknowledging that these episodes can make us feel our lives are a bit, well, mundane. Binet acutely taps into this epochal insecurity of ours. Often our lives can feel small and insignificant compared to those heroes of previous generations, but Binet also finds redemption in our ability to learn from history.