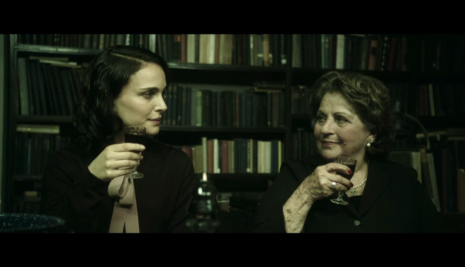 You’ve come to the right place!

Portman makes her directorial debut in the film that’s been about a decade in the making: A Tale of Love and Darkness. The movie is an adaptation of Amos Oz’s 2002 autobiographical novel about coming of age as British-Mandate Palestine transitioned into early-Israel, and his relationship with his family and his history.

Portman also stars as Amos’s mother, Fania, who ultimately committed suicide. The film is in Hebrew, with English subtitles.

The film isn’t out in the U.S. yet (it did play Cannes), but you can watch a never-before-seen clip below. It involves intense discussion about borscht, academia, and awkward family dynamics. What’s not to like?

The film is out in limited release on August 19th (which is Tu B’Av, so there’s your “love” in “Love and Darkness”).