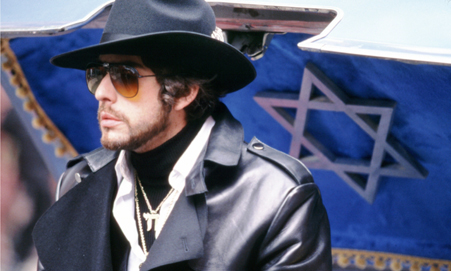 It’s official: There will be a sequel to The Hebrew Hammer, and it’s going to be called Hammer vs. Hitler. Director Jonathan Kesselman announced they had raised enough money ($50,000) through the crowd-funding platform Jewcer.com to make a comedic sequel to the 2003 Jewish classic. Filming is expected to begin in May 2013, again starring Adam Goldberg as the Orthodox hero who saves Jewry from evil forces.

“It didn’t seem the sort of franchise where you wouldn’t want to see him take on one Jewish holiday after another,” Goldberg said in the press release. “You want to see him go after the big one. Who’s the Jewish Joker? Hitler.”

In Hammer vs Hitler, the audience will find a hipster Hebrew Hammer selling trees as a consultant for the Jewish Justice League. Bored and unhappy at his job, our protagonist ends up taking part in an epic mission to chase and kill Hitler on a journey filled with time travel and Jewish history.

“The ascendency of Mordechai Jefferson Carver, aka the Hebrew Hammer, was never intended to be told in one movie. Not even two. More like eighteen, but two is a good start,” Kesselman said. “Don’t worry, Hitler dies in the movie.”

For now though, the loyalty of his large, cult-like audience will be again tested by the amount of dollars they can donate to his ongoing fundraising campaign. Kesselman estimates that he can make the film for $1.5 million, and is hoping to raise $200,000 and keep it independent. In an equitable trade-off, the movie will “belong to the fans.”

Donors who contribute $1,500 will have the option of being an extra in the film, and a contribution of $5,000 is enough to be lifted bar mitzvah-style on a chair on the dance floor at the movie premiere. Kesselman has also asked fans to suggest who he should cast as Hitler.

Natalie Schachar is an editorial intern at Tablet. A recent graduate of Barnard College, she has written for the Times of Israel, The Atlantic, The Argentina Independent and Lilith Magazine.