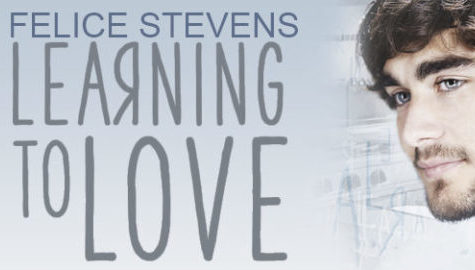 I don’t usually read romance novels, since I don’t believe in love, the indulgence of fantasy, or any activity from which people derive pleasure. Kidding! In all seriousness, though, I don’t usually read romance novels, but when a bargain e-book newsletter promoted Learning to Love: An Enemies to Lovers Contemporary Gay Romance by Felice Stevens, I thought feh, why not. It’s 99 cents.

It was the summary, not the title, that convinced me: “Bad boy Gideon Marks is counting on his new catering job at a synagogue to prove he’s not the failure everyone predicted. But when his high school crush — now Rabbi Jonah Fine — ignites long-buried feelings, Gideon will have to face his past and rethink his future in this spellbinding read. “

Interesting! How much gay Jewish representation is in romance novels, especially erotica? Well, some, but it’s easier to come by, say, Amish representation (and there are way more of us in the United States). Even in fan fiction, you’d be hard-pressed to find a rabbinic AU. In fanfic, everyone is either a barista, librarian, professor, or high-fantasy prince. Never a rabbi.

Turns out,  the feeling is mutual. There isn’t much of the enemies-to-lover subtitle. Gideon has lingering feelings of resentment for a page or two, but by page ten they’re consummating their relationship.

But problems abound! Gideon storms off about something every other page. Sometimes he’s upset about his dyslexia, or how his father left him when he was young, or how he doesn’t feel he’s good enough for Jonah. If I sound cold and unsympathetic, it’s because these issues aren’t treated as anything more than reasons for Gideon to storm off.

Luckily, Rabbi Jonah is endlessly patient, forgiving, and willing to put up with endless tantrums. His father, also a rabbi, is totally cool with him being gay, which is a nice change from garment-rending homophobia that typically plagues religious gay narratives. In fact, Jonah’s problem is way more traditional— he’s taking over as Rabbi, and he’s worried that his congregants will never love him as much as they love his father.

There isn’t a lot of in-depth exploration of Judaism or what it means to be Jewish. But there are a lot of casual mentions of Judaism: nosy, matchmaking synagogue grandmothers; Jewish cuisine; bar mitzvahs and important Hanukkah dinners; Rabbi angst. There’s some talk about what it means to be a Rabbi, such as:

“Spoken like a true rabbi looking for a higher meaning in simple words.”

He grinned and grabbed my ass, giving it a hard squeeze. “The only worshipping this rabbi will be doing tonight is of your body.”

It must be a Reform synagogue.

At the very end, Jonah announces plans for an interfaith social justice committee. Almost immediately, someone sets fire to the temple. Here we get some after-school-special dialogue, which while trite is sadly more relevant now than when it was published half a year ago:

“Who would do such a thing to us? We’ve never had problems before…Occasionally we’ve had hate mail from people; the usual ‘go away, Jew’ but I’ve always dismissed i as ignorance.”

“It isn’t you. It’s them. It’s a combination of fear that the world is changing around them and they can’t accept that not everyone thinks or looks like them, and ignorance because they are listening to the old hatred and prejudices they grew up with instead of opening their eyes and their minds.”

But then the novel quickly wraps up with a happy ending and epilogue. I don’t expect romance novels to be paragons of great writing, and Learning to Love met my expectations. It’s fine. I’ve read better fanfic. I’ve also read worse.

I would only recommend Learning to Love if you’re interested in the novelty factor of the relatively uncornered niche market of gay Jewish pulp erotica. And, if you want a different salad of romance tropes with Jewish dressing, other Felice Stevens novels feature such characters as Micah Steinberg, Josh Rosen, and Daniel Friedman, although I can’t personally attest to the other novels’ Jewishness beyond the names.

Plus, I’m sure they’re all better love stories than Twilight.

Growing Up Gay in Christian Russia