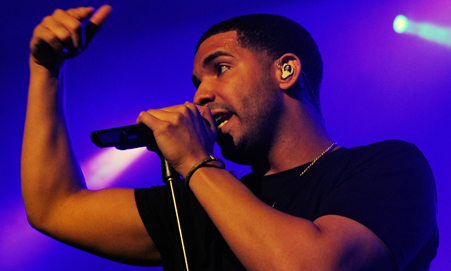 Drake won his first Grammy last night, and it’s safe to say the award has already gone to his head. The rapper’s confidence has skyrocketed with each successive hit, and nowhere is it more visible than in his song lyrics. Let’s start with Drake’s claim in his new single, “Started From The Bottom,” that he wears “every single chain, even when he’s in the house.” It’s an odd type of brag that doesn’t even sound cool to imagine doing. It sounds like it would be really heavy and get in the way of regular tasks like opening the refrigerator or trying to find the remote. Drake owns what, like twenty chains? At least twenty. No one wears twenty chains at once—2 Chainz only wears two at the same time, which, according to Yahoo! Answers, is the acceptable limit.

What’s more, Drake might actually be telling the truth. Claire Hoffman’s memorable GQ interview, which ended with Drake asking if they would have sex, describes Drake’s house as the type of place where opening the fridge door is one’s last concern: “bronze animals—lions, elephants, giraffes!—checker the lawn, glimmering in the last light of the San Fernando Valley sun. A giant fire, fit for a king from Middle-earth, burns in an outdoor fireplace, and a flat-screen TV plays Sixteen Candles.” The man himself is humbly adorned with “two long diamond-rope necklaces.”

The king of bragging we hear in “From The Bottom” isn’t new to Drake. He’s as cocky as they get in the rap game. Which is fine, but what makes this single stand out, and what’s been drawing some ridicule, is its emphasis on class. The title gives it away—Drake started at the bottom, now he’s on the top. Along with the single he included a note on his blogspot (bless you, Drake) that partially read,

I feel sometimes that people don’t have enough information about my beginnings and therefore they make up a life story for me that isn’t consistent with actual events. My family and my second family (consisting of the best friends anybody could ever have) all struggled and worked extremely hard to make all this happen. I did not buy my way into this spot and it was the furthest thing from easy to achieve.

Drake’s background is pretty well-known at this point—I wouldn’t be writing about him for Jewcy if he didn’t have a Jewish mother—through a friend in school he was able to get onto the Canadian teen drama Degrassi as Jimmy Brooks, the nice guy (when Marco is having trouble coming out of the closet in Season 3, Jimmy organizes a sleepover with Marco and Spinner, where Marco saves Spinner from choking on a piece of cheese, helping them to later come to terms with Marco’s sexuality).

Drake grew up poor in a wealthy Toronto neighborhood, a child of divorce with parents living worlds away from each other in Canada and Tennessee. That’s got to be tough on a kid. But it’s not quite Chief Keef and Young Chop tough, growing up amidst Chicago’s shocking gang violence, murders getting announced regularly over the summer, and the mayor going on national television to plead with gangs not to target kids. That feels more like the bottom. And there’s no breakout role on Degrassi in that story.

Drake doesn’t try to downplay his squeaky clean TV past, but the choice to portray himself as such an underdog while 17-year-old Keef is heading to prison (and has a daughter) seems a bit much. Arguing with your mom “every month” is rough, Drake, but it’s not prison. The explosion of diversity of styles in mainstream rap over the last few years, an explosion Drake has partially led, has in turn expanded the range of allowable topics to rap about. So why return to the same old authenticity debate that we’ve been hearing since Ice Cube? Especially on a pretty lame track (to be fair, it’s got a great beat).

That’s the real problem here. Drake can talk about his upbringing as much as he wants, but he’s doing us all a disservice by playing this ‘I’m real’ game, because it’s 2013 and that shit matters less and less every day. More then any other type of music, rap has long been dominated by street cred—Lana Del Rey-gate was nothing compared to how 50 Cent ended (like really ended) Ja Rule’s very successful career with the song “Wanksta”—but it’s not 2002 anymore. With everyone creating, destroying, and reimagining personas on the Internet anyway, it’s increasingly pointless to rely solely on bragging about where you came from.

We know you’re at the top, Drake. Tell us what comes next.