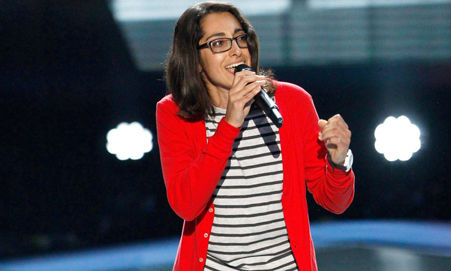 Thank you guys so much for voting and keeping me here to sing more for you! You are the stars.

Only eight contestants remain, each vying for the grand prize, a recording contract with Universal Music Group (and more screen time with celebrity coaches Adam Levine, Blake Shelton, Usher, and Shakira). But 26-year-old Chamuel, from Amherst, MA, has unexpectedly stolen the show. The diminutive and talented singer has a quiet charisma which is offset by what can only be called humility, unusual in a rock star.

She’s also queer and Jewish, though she won’t let that define her—a difficult feat on reality television. I don’t think of myself as “a lesbian musician” or a “Jewish artist,” she said in an interview with After Ellen. “It’s not one and alone. I think of myself as a musician.” (She also revealed she only shaves one of her legs, which is pretty awesome.)

“I think I represent nerdy people,” Chamuel said with a disarming smile in the opening episode. “People misunderstand me sometimes. As an introvert, people take me to be aloof. Someone says hello to me, and it’s terrifying. Like, should I tell them I just had the best day ever? And then they’re like, what is wrong with this person?”

Despite her introversion, Chamuel seems to have run away with America’s heart. Throughout every round she’s been saved by viewers, who call in or text message votes for their favorite contestant. From her first appearance, she had the judges eating out of the palm of her hand. For her blind audition (the judges can’t see the performer, they only hear her voice), she appeared on stage in a black and grey striped shirt under a red cardigan and sang Katy Perry’s “I Kissed a Girl.”

Adam Levine pushed his buzzer for her after she had sung only two phrases of the song. Shakira followed suit soon after. Usher’s hand lingered over his buzzer—will he press it? won’t he?—until finally, with a smile that looked almost like defeat, pressed it just seconds before the music stopped.

With three judges at her disposal, the choice was now Chamuel’s. The celebrities began to fight for her vote.

“There’s a rock chick inside of me, too,” Adam Levine said. “You look so pure, yet when you sing, it’s like, you’re gonna stop the earth. I love you!”

“I love you too!” Shakira threw in, not to be outdone.

Usher was less enthusiastic. “You impressed me,” he said simply. “It’s your first time, it’s my first time. We could go far.”

The show has impressively wide-ranging appeal, garnering 13 million viewers mid-season (all the more significant considering rival American Idol’s subpar finale ratings). This success, as far as this viewer is concerned, stems from the show’s unique set-up, powerfully evocative of family life. Think about it: you have a bunch of authority figures, beloved and all-knowing, with both the power to judge and the power to teach. Then you have your group of youthful hopefuls, wanting the world and more, desiring first and foremost the love of these superstars—and then, no doubt, to ultimately supersede them.

But here’s the kicker: instead of having a gaggle of siblings competing for the love of two parents, four parent-figures compete for the love of a group of artists (in the first slew of episodes, anyhow). There’s even a section of the show devoted to “stealing”—should a judge reject an artist, the other judges can swoop in and rescue the artist, bringing him or her over to their family—I mean, team. There’s something deeply compelling and rather perverse about it. Perhaps this is what might lead an artist to change her plans last minute, from selecting the coach she had planned on choosing (Chamuel initially said she probably would choose Adam if he hit his buzzer for her) to selecting the only one who wouldn’t tell her he loved her.

Chamuel ends each song with an utterly heartbreaking look at Coach Usher, but her humble charm has all the coaches rooting for her. “You take the competition right out of this for us,” Adam said Monday night after her performance, a rendition of Pink’s “Just Give Me a Reason”, in which Chamuel wore slacks, a jacket, and her trademark black plastic glasses. “We’re all just beaming with pride over how much success you’ve had,” he said.

And Usher, for his part, stood up to cheer during the performance, and after she was done, said, “There’s nothing on that stage but you.”