Over the next several weeks Jennie & Patrick will be getting fit for your viewing pleasure. Not only will they be reporting the embarrassing details of their physical disrepair, but, like all good Jewish professionals should, they’ll be making this a Jewish fitness journey. Each week they’ll be reviewing a new Jewish fitness fad and reporting whether the Chosen method de-schlubinates as promised. This week, we get to see the “before” stats and find out why these two have chosen to humiliate share themselves in this public way:

I used to be hot. Back in grad school I was called the “Babe of the Department”. Now granted, I went to Georgia Tech which buses in pretty women from Athens for the weekend. But, I was cute. Now it’s 15 years later and, well, I’m kinda fat, not obese, but squarely middle-class fat, and more importantly: unfit and out of shape. Yeah, it’s important for everyone to be fit and in good health, but especially for me. Genes are not on my side: I’ve already had cancer, for crying out loud. This Yom Kippur I confessed my sin of slovenliness and made a commitment to change during a very powerful Kapparot experience I describe here. Bottom line is that I made a promise to a chicken that I intend to keep. I’m turning 40 December 30th and I will be well on my way to fitnessful living by then. I’m in the busiest and most stressful part of my year right now and there is only one thing that will keep me exercising and prevent me from stuffing my face with chocolate gelt: publicly declaring my commitment to you all, dear readers.

Back in the good ol’ days when I needed to lose weight, I’d go on tour with a rock band. There’s nothing like a healthy dose of cigarettes and ramen noodles to help you drop twenty pounds, and touring makes you much more self conscious because you spend every waking hour chasing after ladies. But I’m getting domestic. Can!!Can’s next tour isn’t until December and now that I’m engaged, I find my self sitting around on the couch with my dog watching The Office on Netflix more than pumping iron at the JCC. With my big speech in front of the General Assembly of Jewish Federations, my wedding, and my next Can!!Can tour only a few weeks away, I have all the reason in the world to lose this tire that HaShem (and a lot of my fiancee’s dairy-and-carbohydrate-rich vegetarian meals) have put on my gut. My goal is to lose nearly thirty pounds. Yes, I recognize that this goal is insane and that the only people who lose thirty pounds in a month are on the scarf-and-barf diet made popular by all the After School Specials that I used to watch as a kid…but I think by setting an out-of-reach goal, I’ll be able to make more progress, faster, than if I tried to be realistic. 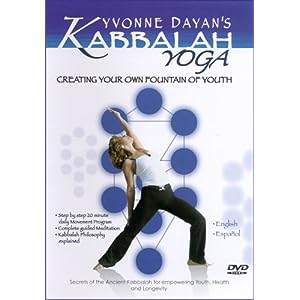 Each week Jennie & Patrick will be checking in with their progress, updating their stats and pics, as well as reviewing a Jewish fitness fad. This Week’s Jewish Fitness Fad: Kabbalah Yoga Tune in next week for their fitness update and fad review.

One More Crazy Celebrity at the Kabbalah Center