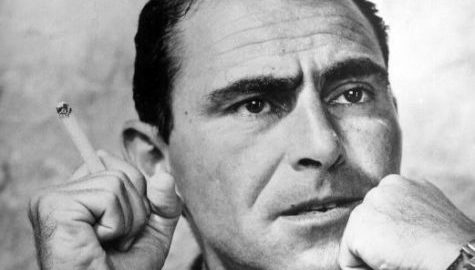 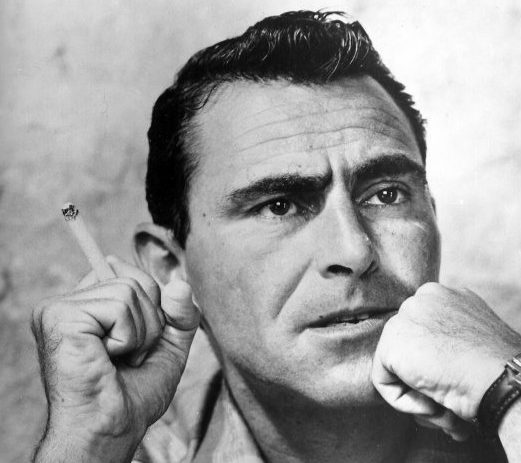 If television had a prophet, he was called Rod Serling, a Space Age Jeremiah, come to edify the masses. So long has his reputation stretched over the medium, that any anthology series produced in its wake—from British import Black Mirror to the recently premiered Philip K. Dick’s Electric Dreams—is often tagged as “The Next Twilight Zone.” Chided gently these days for the same bluntness that ensures the show’s longevity, Serling’s weekly doses of mussar nevertheless characterized The Twilight Zone as a series informed by his experiences as a veteran and a Jew writing in the aftermath of World War II.

The roots of science fiction may be Judaic in spirit (if you believe Asimov, after all, the golem was our first stab at robotics), but The Twilight Zone actually fits just as well, if not better, in a different cultural landscape: the World War II novel. In a strange turn of events, the history of the Second World War in America was largely carved out by returning Jewish American GIs, and it was largely a way of grappling with the anti-Semitism they had witnessed at home and abroad. Norman Mailer, Ira Wolfert, Merle Miller, Stefan Heym, Leon Uris, even J.D. Salinger—all were creating war epics that pondered a war both justified and perplexing. Perplexing in that it saw these men as scapegoats of their own cause, harassed beforehand, demeaned during, and blamed afterward. It’s no surprise novels like Joseph Heller’s Catch-22 run towards the sardonically absurd, and the whole system collapses under the weight of its nonsense.

Neither did these stories veer away from incrimination. Herman Wouk’s The Caine Mutiny has just reached the highest point of drama when its Jewish military lawyer drunkenly contemplates how the book’s anti-hero had saved his mother (but not his other relatives) from becoming soap. Irwin Shaw’s angry young men are constantly bruised by the world they can’t escape and ponder whether to takes arms against it. Martha Gellhorn’s Point of No Return does have its Jewish protagonists take up arms, and so plots a course for all future revenge fantasies.

The Twilight Zone exorcises these specific Jewish anxieties of Serling in different ways. Several Twilight Zone episodes confront the randomness of death: in “Nothing in the Dark,” for instance, Death in the guise of a young Robert Redford coaxes an old woman into leaving her home for the great beyond; in “One for the Angels,” a pitchman manages to trick Death into trading his soul for a little girl’s. This preoccupation with death stemmed from an incident while Serling was stationed in the Philippines and a fellow Jewish soldier was killed in a freak accident, a crate of food dropped by a plane flying overhead.

Furthermore, though Serling’s placement resulted in most of The Twilight Zone’s WWII episodes being set in the Pacific theater—“A Quality of Mercy,” in which an American soldier swaps places with a Japanese soldier; “The Purple Testament,” in which a young GI discovers he can read death on his friends’ faces—his guilt over having missed the war in Europe led to some of the crueler twists in the show, such as in “Judgment Night,” when a Nazi U-boat captain is trapped in a purgatory of his own making.

Nevertheless, Serling did go on to tackle the Holocaust, both in metaphor and blunt force. It’s often believed that the Holocaust was not broached in popular fiction until decades later, but in fact those Jewish vets were confronting and questioning the Holocaust, sneaking up the best seller lists. On the parabolic side, Serling would often deliver his message with a splash of alien life and sans delicacy. Threats, real or perceived, lead to neighbor turning against neighbor in episodes such as “The Monsters Are Due on Maple Street,” “The Shelter,” and “Will the Real Martian Please Stand Up?”. Authoritarian governments lurk in both the foreground (“The Obsolete Man”) and the background (“Eye of the Beholder”), and trumped-up strongmen are toppled on every extraterrestrial surface (“The Little People,” “On Thursday We Leave for Home”).

There were two episodes in The Twilight Zone’s run, however, the dealt with the Holocaust directly: one as judgement and one as warning. “Death’s-Head Revisited” is thirty minutes of cathartic rage: an old SS guard (“a black-uniformed strutting animal whose function in life was to give pain”) returns to his stomping grounds at Dachau and is punished by the ghosts of the slain. (“This is not hatred,” says the spectral prisoner, Becker. “This is retribution. This is not revenge. This is justice. But this is only the beginning, Captain. Only the beginning. Your final judgment will come from God.”) Serling’s narration, too, is pointed and desperate as it can be:

“There is an answer to the doctor’s question. All the Dachaus must remain standing. The Dachaus, the Belsens, the Buchenwalds, the Auschwitzes – all of them. They must remain standing because they are a monument to a moment in time when some men decided to turn the Earth into a graveyard. Into it they shoveled all of their reason, their logic, their knowledge, but worst of all, their conscience. And the moment we forget this, the moment we cease to be haunted by its remembrance, then we become the gravediggers. Something to dwell on and to remember, not only in the Twilight Zone but wherever men walk God’s Earth.”

The second episode to address the Holocaust head-on was “He’s Alive,” whose twist (the evil man in the shadows tempting Dennis Hopper is actually Hitler!) may lend itself to mockery, but Serling’s fear, only a decade or so after the Holocaust, that Nazi beliefs would thrive once more is palpable. (And, one may argue, predictive.)

So yes, The Twilight Zone may have been obvious. It may have been ludicrous or campy. But what is lost in the reduction of The Twilight Zone to its shocking moments is that it is the journal of a man scarred by island-hopping and the bomb and death camps rediscovering hope and re-pledging himself for life. And what, after all, could be more Jewish than that?