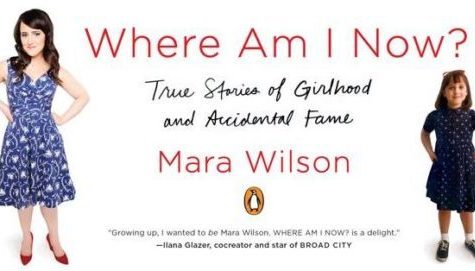 Some of you may only know Mara Wilson as Matilda. Or as the youngest child in Mrs. Doubtfire. Or, for a deep cut, as the star of Thomas and the Magic Railroad. For someone who was famous as an actor before the age of ten, releasing a memoir before the age of 30 makes sense. The new book, Where Am I Now?: True Stories of Girlhood and Accidental Fame, is a smart, honest look at Wilson’s childhood and early adulthood, both in the spotlight, and out of it.

For example, she has poignant remembrances of Robin Williams, faces the dread of aging out of her casting niche (the word “cute” is a loaded one for her), and has a disturbing experience where she finds images of herself as a little girl being used pornographically. These are not the coming-of-age experiences of your average girl. But she approaches them with the same weight that she does with other formative experiences, like becoming a big sister or trying to decide if there’s a God. She grew up in a family that worked its hardest to keep her grounded, and it shows.

Wilson has also had really terrible experiences that can happen to anyone. Her fame had nothing to do with the loss of her mother to cancer, or her struggles with mental health, including depression and Obsessive-Compulsive Disorder.

And of course, throughout the book, she returns over and over again to her Jewish identity. Her mother was Jewish, and she is too, but her father and step-mother are Catholic, and she had very few Jewish friends as a child. She brings in her identity, sometimes faltering, when dealing with mortality, neuroses, and moving to New York. Wilson knows only too well how being Jewish makes you a minority. In one great anecdote in the memoir, when cast in a remake of Miracle on 34th Street, Wilson’s mother tells her that the plot is about a little girl who doesn’t believe in Santa Claus.

“Is she Jewish like us?” Mara asks in response.

Fundamentally, Wilson’s memoir works because, from the the funny, to the tragic, to the bizarre, it feels familiar. Looking back, she’s self-deprecating, but never a defeatist, the advantage to being the adult she is today. She could easily be in your group of friends.

But really, all you need to know is that the cover blurb is by Ilana Glazer. QED.

For those of you unfamiliar with her current career, she does enough great work now that you can easily be a fan without ever seeing her act on film. Try listening to her storytelling, or check out her recurring role on Welcome to Night Vale, or read some of her writing, like the hilariously apt McSweeney’s piece, “What a Straight Man’s Favorite Musical Says About Him.” If you want to learn more about her Jewish identity, she wrote an amazing piece for The Toast about a book series written for Orthodox Jewish girls she read.

Or, you could just hang around Brooklyn and Queens. You’ll run into her eventually.