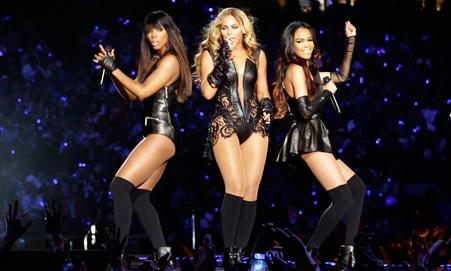 If you’re part of the American Super Bowl-viewing public—or have a working Internet connection—you’ve seen Rubin Singer’s work, even if you have no idea who he is. The third-generation Russian designer created the show-stopping leather-and-python outfit that Beyonce Knowles wore during her mega-watt halftime performance, sending his high-fashion profile skyrocketing.

The Austrian-born designer, who’s worked with Knowles before, told me he was approached by her stylist about creating an outfit for her halftime performance. “I was elated and excited about it,” he said.

After all, designing for high-pressure gigs is literally in Singer’s blood—his father Alik designed costumes for the Bolshoi ballet and his grandfather dressed Soviet commanders. “I’m a third-generation Russian fashion designer,” he explained. “I’ve been around it all my life.”

Singer’s grandfather, for whom he was named, was a Polish Jew who defected to Russia and, revealing his skill as a designer, was asked to make a suit for a Soviet officer. That was his entrée into the political sphere, according to Singer, at which point he began a career dressing Soviet celebrities. “He became a famous Soviet designer,” Singer said.

Singer, an only child, moved from Paris to the United States when he was seven years old, and knew from a young age that he was destined for the family business. “I’ve grown up in this industry,” he said. “My dad taught me everything I know.”

“I told him to be a lawyer or something else,” Alik Singer told the New York Times in 1998. “Now he turns around and wants to be a designer. What can I say?” Luckily, the elder Singer has since embraced his son’s sartorial ambitions and now works with Rubin on his collection. Which is good, since their phones have probably been ringing off the hook ever since Knowles left the stage at the Superdome.