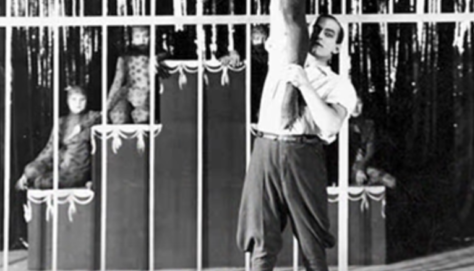 Today is Yom HaShoah— Holocaust Remembrance Day, a day that can be really emotionally raw, or intense, or numbing. So if you want to take a moment that’s still in the spirit of the day, there’s plenty of music related to the Shoah.

In fact, you could spend your whole life on Holocaust music; there are ongoing projects to collect and preserve music written during the War, as well as by those who perished in it. And not all of it is so obscure; there’s famous works of art produced in camps and amongst resistance groups. Today, we’re just curating a short list of five Jewish men who contributed to music culture before the War:

Miklós Vig was a Hungarian singer, actor, and comedian, best known as a cabaret performer. You can hear him sing on this track:

Leon Jessel was a German operetta composer who enjoyed great success in his lifetime, and at least one piece of his is still often heard today. Jessel was a convert to Christianity, but he still remains on the long list of Jews who’ve created Christmas music— if his “Parade of the Tin Soldiers” is familiar, it may be because the Rockettes use it in their Christmas Spectacular:

Szymon Kataszek was a popular Polish musician best known for the club and jazz scene, but he also wrote for film, including this waltz:

Józef Koffler was a Polish composer and music academic who was prolific in his lifetime and has an enduring legacy. This piece is one of his earliest works we still have:

Jakub Kagan was, like others on this list, a Polish-Jewish musician known for his work with jazz bands. This tango (often performed with rather risqué lyrics), was arguably his biggest hit:

Image of “Złota Pantera” (“The Golden Panther”) via YouTube.