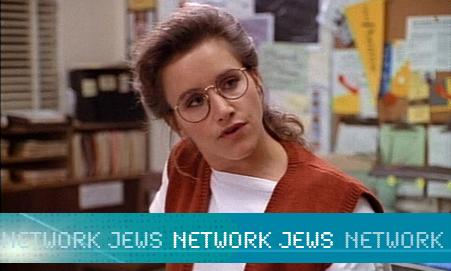 The halls of West Beverly High School are no easy place to navigate. Yet when Brandon and Brenda Walsh arrive from Minnesota, fresh-faced and wide-eyed, at the start of the long-running hit series, Beverly Hills, 90210, they almost immediately fall into step with a group of attractive, social, wealthy friends. There was the beautiful Kelly Taylor, party animal Steve Sanders, good girl Donna Martin, and tough guy Dylan McKay. They all had their place in the West Beverly ecosystem, and new kids Brandon and Brenda soon assumed their own positions at the top of the social order.

But not everyone at West Beverly had it as easy as the magnetic Walsh siblings. For some, finding a spot in the social order was more complicated—and more realistic. We meet the brainy, driven Andrea Zuckerman (pronounced On-drey-a and played by Gabrielle Carteris, who at 29 was the oldest of the high school pretenders) in the first episode when Brandon joins the school newspaper, and their relationship (platonic, awkward, briefly hot and heavy, platonic, platonic, etc.) drives much of the plot through Season 5, when a grown-up Andrea leaves the show.

Andrea is the outcast, and remains so throughout the show. She’s not stylish like Kelly, she’s not into partying like Brenda, and she’s not rich like Donna. (She also wears big glasses and unflattering outfits, which is network television-code for uncool.) In the very first episode, Brandon follows her home to apologize for some characteristically high school misstep, and inadvertently stumbles upon her dark secret: Andrea lives outside the school district, but uses her grandmother’s 90210 zip code on school paperwork. She is very literally not one of them.

While the Midwestern-bred Brandon represents the visible outsider, a role he is quickly able to shed, Andrea represents something far more insidious in a place like Beverly Hills: she remains the outsider within. For Brandon, Andrea comes to represent a sort of moral compass, someone not tainted by the values and judgments of his spoiled peers. He is drawn to her normal-ness, which of course excites her because it brings them close, but which she knows means they have no future together. (Someone even put together a video montage of Brandon and Andrea—Brandrea?—set to Taylor Swift’s “You Belong With Me.”)

More interesting, however, is Andrea’s Jewishness. She’s a Jewish girl from Beverly Hills, but she so totally isn’t. Not only does she not actually live in Beverly Hills, rendering that distinction somewhat futile, Andrea couldn’t be farther from the Cher Horowitz mold of spoiled Jewish girls depicted in film and on television. That’s a role much better filled by WASPy waifs Kelly or Donna (played by the Jewish Tori Spelling), who become her close friends for the sake of narrative cohesiveness, though she never seems to be as close with the group as they all are with each other.

Andrea gets in to Yale, her dream school, but chooses to save money and go the CU route with the rest of the gang (for most of whom saving money was never a priority, or even an afterthought). She starts dating her RA, the wealthy Dan Rubin, but breaks up with him after meeting Jesse, the Hispanic Yale grad moonlighting as a bartender. In a classic 90210 story arc, they have unprotected sex, she gets pregnant, considers an abortion, and then she and Jesse decide to have a shotgun wedding, all within a few episodes.

She faces issues that are far removed from the bubble her friends live in (like Steve trying to avoid being identified by the Dean—his girlfriend’s father, naturally—as one of the frat guys who streaked across campus) but which seem much more realistic, even for 90210. When she and Jesse clash over what faith to raise their child in, or she deals with being a young mom while in school, it just feels more real. She’s the regular one on the show, the character viewers could connect with. And on a long-running show with enough drama to fill several soap operas, that kind of consistency is important.

Previously on Network Jews: Lilith Sternin, the Ex-Wife From Hell on Frasier