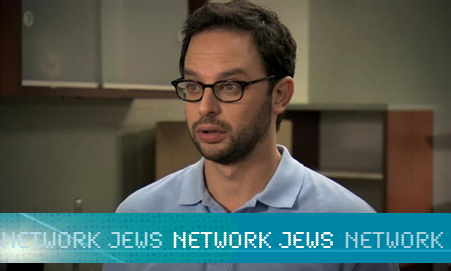 A confession: I have a crush on Ruxin. There, I said it. Yes, Rodney Ruxin (Nick Kroll), the Jewish products-liability attorney on The League, is an insufferable jerk. Yes, he seems willing to go to great lengths to humiliate and sabotage his friends. Yes, his morals seem, well, flexible. (In one episode, Ruxin defends a paint company whose cans explode by arguing that anyone buying such a cheap item should have “a reasonable expectation that that product will explode in your face.” “And, morally, you’re good with this?” asks his friend, Pete. “There was just one word in there that I am not familiar with,” Ruxin responds.)

So, yes, I know that I should be embarrassed about my crush. “I can’t even unpack that,” one friend responded when I told her about my attraction. Well, I can. Maybe what’s attractive about Ruxin is that he’s part of a rebranding of the Jewish man: not the nerdy, nervous nebbish of yesteryear but a cocky, self-assured asshole.

Ruxin’s loutishness sometimes plays off his Jewishness. In one memorable episode, he hosts a Sukkot party in an attempt to butter up the Jewish preschool teacher to improve his son’s chances of being accepted. “Wonderful news to fill your pathetic social calendars,” Ruxin warmly says by way of announcing the party to his friends. “Since when does Sofia allow you to celebrate Judaism in your house?” one buddy asks, referring to Ruxin’s decidedly non-Jewish wife. “Forget Sofia, since when do you allow Judaism in your own house?” asks another. Well, ever since baby Geoffrey needed to get into a good preschool, of course. Ruxin warns his friends not to park in his driveway, which has a pothole; when he hears that the city will expedite cleanup on racially insensitive graffiti, he spray-paints a swastika on his own driveway. In poor taste, sure, but the man knows how to get things done, even if it means, you know, appropriating a Nazi symbol.

That’s what’s liberating—and appealing—about Ruxin: his brazen boorishness isn’t bound up with his Jewishness. Unlike Jewish putzes of the past—slimy lawyers like The Wire’s Maurice Levy or cripplingly analytical men in the Alvy Singer mold—Ruxin’s bad behavior exists independently of his Jewishness. He knows it, too: “If I did look inward, which I won’t,” he says, “I think we would find that my Judaism would be the least objectionable thing about me.” You have to like a guy who doesn’t engage in the kind of endless introspection typically characteristic of Jews in popular culture, or one who doesn’t view his Jewishness as a burden or a mark of Cain, forever setting him apart. See what assimilation has wrought—a man can just be a jerk like everyone else.

But Ruxin isn’t without some ancestral anxiety. He is, in some ways, a product of his people. In a fit of cold feet before he marries the Catholic, Hispanic Sofia, Ruxin blurts out, “I’m worried that her family full of conquistadors is going to round up my whole family and stick us in a basement and put yellow stars on us.” Even here, it’s clear that Ruxin’s Jewishness is nominal at best; mixing a touch of Inquisition-era worries with a healthy dollop of Holocaust neurosis, Ruxin’s sense of Jewish history is a jumble of victimization across time and geography. Being Jewish, for Ruxin, is merely being subject to the occasional moment of deep-rooted paranoia—but not so deeply rooted that it can’t be soothed, in this case, by the reassurance of knowing that he is marrying a very attractive woman. Sexy, right? A man who coasts through life on his assimilated rudeness but maintains some iota of his people’s historical dread is, after all, every girl’s dream.

Jewish jerks aren’t new. And they’re generally not attractive—no one swoons over Shylock. But Ruxin’s different; his Jewishness is refreshingly tangential to his coarseness, one of many facts about Ruxin instead of his defining fact. Also, when he thinks he’s home alone, he sings about eating crackers and jelly in the goofiest voice imaginable. It’s kind of adorable.

Willow Rosenberg, the lesbian witch on Buffy the Vampire Slayer.