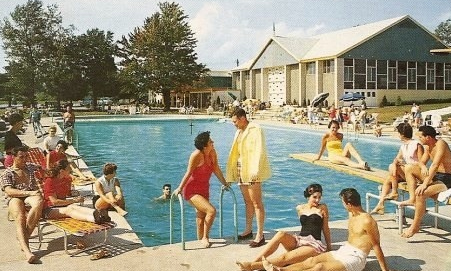 The final chapter of Welcome to Kutsher’s: The Last Catskills Resort, a new documentary centered on Kutsher’s Hotel and Country Club, begins with a prescient clip from Dirty Dancing, the film which serves as a reference point for the former Borscht Belt experience. “It all seems to be ending,” says Max Kellerman, the owner of composite fictional resort Kellerman’s, to his staff member Tito. “You think kids want to come with their parents and take fox-trot lessons?”

The kids may no longer come up to dance, but they are, as some believe, the last hope for revitalizing the once thriving vacation area. A recent New York Times article highlighted the Catskill Park Resource Foundation’s efforts to raise $5 million to rebrand the Catskills. As the article put it, “The idea is to make people think of the Catskills in terms of trout fishing, artisanal cheese and Zen retreats, rather than Simon Says, rimshot comedians and Dirty Dancing.” Brendan Burke, artistic director of nearby Ellenville’s Shadowland Theater, is quoted saying, “You hear [the term Catskills] and think bungalow colonies and resorts with bad carpet.”

The thing is, though, I loved the carpeting at Kutsher’s. In the many years I spent visiting with my family, it was the most memorable physical component of the space. When we arrived, we’d park the car in front, under the neon yellow “Kutsher’s” sign, hand off the keys to a dapper valet, and walk in with buoyant carpeting underfoot. It felt like landing on the surface of distant yet familiar planet.

My aunt, married to my mother’s brother, is the daughter of Helen and Milton Kutsher, the second-generation owners of Kutsher’s. I grew up going to the hotel every Thanksgiving and for various events throughout the years. And while I may have visited the hotel during its so-called decline, in the 1990s and early 2000s, I remember the place as grand and exotic. Its particularities are frozen in my memory, from the pastel coloring of the walls to the pervasive smell of matzoh ball soup that got stronger as you approached the dining room.

I’ve stopped going to Kutsher’s, because it is no longer a fully functioning hotel. The last trip I made was in 2009, to attend the U.S. version of All Tomorrow’s Parties, a music festival which originated in England but was held at Kutsher’s in 2008, 2009, and 2010. While there, I heard a lot of people talk about the hotel’s state of decay. Many attendees seemed to take ironic enjoyment in comparing Kutsher’s to the Overlook Hotel from The Shining. The epilogue of Welcome to Kutsher’s covers All Tomorrow’s Parties and features interviews with people there, many of whom also make that same comparison.

It’s clear from the film that Ian Rosenberg and Caroline Laskow, the husband and wife team who directed and produced the documentary, were charmed by Kutsher’s, just as I was growing up. When I spoke with Rosenberg over the phone, he recounted a trip to the hotel with Caroline as a young couple in 2005. When Laskow asked if he wanted to take a vacation to a Jewish resort in the Catskills, he replied, “Yeah, but we don’t live in the 1960s.” Despite reservations, Laskow assured him it would be affordable and worthwhile. So they went, ate, and came away convinced that Kutsher’s was perfect material for a documentary.

They began shooting in 2007, and returned to the resort in 2010. Much of the footage and interviews come from the Kutsher family, who had been approached by filmmakers in the past though no projects were ever completed. “The topic seems small–one element of the Jewish American experience—but there’s actually so much in it, from entertainment to music to culture and religion,” Rosenberg explained. “Other projects didn’t move forward because they didn’t have the focus that we did: one Catskills resort and looking at the big picture through that one story.”

I completely agree. The joy of Welcome to Kutsher’s is that it captures what was unique and special about the hotel while also expounding on the larger significance of the Catskills in the American Jewish consciousness. In one particularly memorable scene, as Helen Kutsher talks about hiring Wilt Chamberlain as a bellhop, the film cuts to a clip of a young Chamberlain towering over a guest. It’s a larger than life moment, one of many in Kutsher’s storied history.

There have been two screenings of the film in Manhattan, both during the New York Jewish Film Festival at Lincoln Center—the first, the world premiere, sold out before tickets went on sale to the general public, and the second sold out within an hour. During the Q&A session with Rosenberg and Laskow following the first screening, a familiar-looking audience member stood up to tell them what a wonderful film it was, and what a gift it was. He continued, explaining that the Kutsher family was overwhelmingly hospitable to him and his wife, who wasn’t Jewish, when they visited. As the man continued to heap praise on Kutsher’s, Laskow leaned over and whispered, “That’s Jerry Stiller.” Sure enough, it was—and Stiller is giving an interview that will be added to the film this fall.

“People are delighted to see the film, because their goal is to try to preserve this piece of Catskills history before it disappears,” Rosenberg told me. “This is the last of the Catskills resorts and we didn’t only want to look back, but also to show you that it is still existing, though it is about to vanish before our eyes.” Yet while the Kutsher’s resort may be nearing extinction, the name and the emotional resonances it evokes in American Jews continues to thrive in new ways. The latest incarnation is Kutsher’s Tribeca, the trendy downtown restaurant opened by Helen’s grandson Zach Kutsher that serves bug juice, duck schmaltz fries, and delicatessen charcuterie. The restaurant is mentioned in the final scene of Welcome to Kutsher’s, an apt reference to the future of the Kutsher’s legacy. I may not go up to the Kutsher’s Hotel to fox-trot, but I’ll get a Rueben at Kutsher’s Tribeca any time.

Welcome to Kutsher’s: The Last Catskills Resort will be screened at the JCC in Manhattan on Tuesday, September 4. Tickets are available here.

Jared Levy is interested in the intersections between music and philosophy. He tweets here.

A Conversation with Eleanor Bergstein, Writer and Producer of ‘Dirty Dancing,’ on its 30th Anniversary