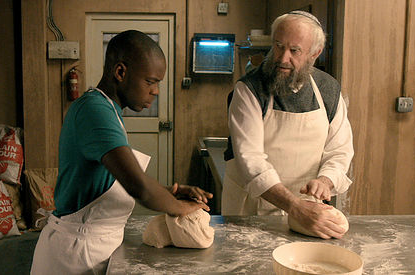 Food may well be the defining characteristic of the Jewish people. Any culture has its signature, but to add to that, there’s a ritual element, and even the term “kosher” can’t be broadly applied since everyone has a slightly different idea of what kosher means, especially in the United States.

Nothing is quite that complicated in Dough, the new film from British-Austrian director John Goldschmidt. In London’s East End, Nat Dayan (Jonathan Pryce) owns and operates a kosher bakery. He has steady clients and no real competition until a neighboring supermarket chain poaches his kitchen assistant and prepares to manufacture its own line of kosher bakery items while simultaneously expanding and attempting to acquire his bakery space. No one is debating whether Nat is kosher enough, but he may soon become irrelevant. Fortunately, he finds Ayyash (Jerome Holder), the son of the woman who cleans his shop. When Ayyash’s side gig as drug dealer leads to him dropping his stash into the dough, the results are incredible, and before long, this kosher bakery is seeing more business than it has had in years.

That summary suggests a slapstick format where everyone gets high the entire film without knowing it. That does happen, admittedly, but it’s far less highlighted than it might be in, say, a stoner comedy. This is a much more sophisticated film about cross-cultural relations than its title and premise might suggest. The fact that Ayyash is Muslim – and observant at that – adds tremendously to the film and its interesting depiction of a positive relationship that starts out somewhat rocky and builds towards something much stronger.

Shortly after Ayyash is hired, Nat, wearing a tallit and tefillin in the middle of his morning prayers, emerges from the back of his shop to find Ayyash conducting his own morning prayers on the floor of the shop. His first reaction is one of surprise, and his next move is to tell Ayyash to move away from the window so that no one will see him. No hints of extremism are present, and Ayyash gets a stern and hilarious slap from his mother when he reacts with shock to the news that she works for a Jew. Nat’s Jewish friend does refer to Ayyash as an Arab, prompting Nat to correct him and note that his new Muslim employee is actually African.

Depictions of observant Judaism in film and television are usually cringe-worthy, with stereotypes exaggerated to make sure that someone is recognizably Jewish. There are moments when Nat murmurs prayers to himself, but, surprisingly, the words are mostly correct! Nothing is done explicitly to be showy, and most religious cameos – like Nat’s tefillin – aren’t even addressed at all. Nat keeps kosher and runs a kosher bakery because it’s part of his religion, and at no point does he wrestle with staying faithful to his traditions or adapting to a new world. For him, it’s just a fight to hold on to his shop, not his defining principles.

Ultimately, both Nat and Ayyash are struggling to survive in changing times. Nat used to have a thriving business inherited from his father, and now he is getting older and finding it more difficult to run it by himself. Ayyash lives with his mother in their decrepit apartment, where he sleeps on the floor, and constant assurances that his father is coming soon are continually met with disappointment. Together, the two men are able to accomplish something, and even though Nat would never approve of Ayyash’s secret ingredient, the way that the bakery manages to take off in popularity is affirming and delightful.

Jonathan Pryce, an actor known for starring in Terry Gilliam’s 1985 cult classic Brazil and probably more widely for playing Keira Knightley’s father in Pirates of the Caribbean: The Curse of the Black Pearl and the High Sparrow on Game of Thrones, is the unusual choice to play Nat. The Welsh actor is actually a wonderful fit for the temperamental but kindhearted baker who eventually takes a liking to his new employee. Opposite him, Jerome Holder delivers an endearing performance as the initially troubled Ayyash, headed down a dark path as he tries to make ends meet before letting his sweeter side shine through as he adjusts to a more stable life in the kosher bakery business. Pryce and Holder are joined by Pauline Collins as a local woman and friend of Nat, Ian Hart as Ayyash’s other boss, and Philip Davis as the imperialist owner of the supermarket chain, a respectable and effective ensemble that helps to elevate this dramatic comedy above its potential.

Could such a story play out in real life? Maybe not the part about baking marijuana into the challah, but the notion of Muslims working in kosher establishments has definitely happened. Lassana Bathily famously saved a number of French Jews in the Hypercacher in Paris when it was attacked by gunmen. That true story has far more frightening undertones, and this more light-hearted tale about inter-religious cooperation is appropriately calm and pleasant. Even if it doesn’t achieve world peace, this movie should at least have you craving the baked goods shown on screen — with or without a special something.