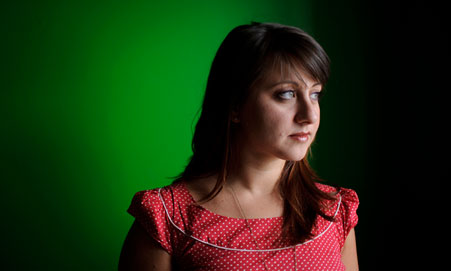 The week that the Congress was set to reauthorize the Violence Against Women Act, Time published a photo essay by Sara Naomi Lewkowicz that documented a night of domestic violence at a house in Southeastern Ohio.

The 30-year-old Ohio University graduate student had been documenting the relationship of Shane, 31, a recently released felon with a history of drug problems, and Maggie, 19 and a mother of two young children from her estranged husband for four months. It had been her intention to chronicle Shane’s reintegration into normal life after years spent in and out of jail. But on the night of the fight, Lewkowicz’s photo essay turned into a portrait of a hidden private crime—domestic violence.

Since the publication of “Shane and Maggie”—first on fotovisura and then in Time—the essay has gone viral and sparked conversation about domestic violence. It has also brought no shortage of criticism on the victim and the photographer who witnessed and chronicled that dark night.

I spoke to Lewkowicz about what happened that night, and the controversy that followed.

How did the violence begin and escalate?

They got into an argument at the bar because another girl was flirting with him and Maggie got jealous and left. Once we got back to the house and it started to escalate and he started making it about him, how he was the one who had the right to be angry, not her.

He shoved her as soon we got into the house. I wasn’t sure if it was going to be it. By the second time, I said okay, this is going to go to a place that isn’t going to be good.

Did you feel in danger at all during the incident?

I never felt at all in danger or scared. I kind of intellectually acknowledged that there was a very real possibility that I could be in danger but he never directed his anger towards me. The only time I felt actually in danger was when I put my hand in his pocket to get my phone back. I was like, “Alright, I might get punched in the face.” [Shane had previously borrowed it to call Maggie after she left the bar.]

What went into the decision to continue taking photos of the incident?

It was kind of a multilayered thing. Part of it is that I’m a visual journalist—I document what I see and I know that people don’t see this very often. It was the idea of taking something that is usually such a hidden crime, so private, and showing what it looked like. Also, I wanted him to know that I was taking those pictures. I wanted him to know on some level that somebody was watching, somebody was witnessing.

What was your reaction to seeing the photos you took for the first time after the incident?

I pretty much knew what I had that night. I knew from scrolling through the photos. I showed them to Maggie that night. I said, ‘Look I’m not trying to tell you what to do or how to live your life, but this is what it looked like from where I was standing.’ It’s a lot harder to deny the severity of something when it’s presented to you in a photograph. You can get into a fight with somebody and then later deceive yourself into thinking it wasn’t a big deal when it really was.

Honestly, I didn’t react very emotionally to the photos. I reacted emotionally later on when I heard the 911 tape. [After Sara took her phone back from Shane, she gave it to another person in the house and directed them to go to the bathroom where he couldn’t see them and call 911.]

I got really emotional over that. I looked at the photos and I knew that this was a very intimate portrayal of something I don’t usually see portrayed. I didn’t react differently to the photos than I did to being there. I was there.

You noted that domestic violence is something that most people never witness. Now having witnessed it, did it upset any of your preconceived notions of DV or confirm them?

It gave me an introduction. I had never seen it. I have never experienced it in that I’ve never been physically assaulted by a partner. What struck me about it was how many signs were there before it happened that I wasn’t even aware of or completely conscious of. When I look back at the photos, the photos seem to know what I didn’t. I think I was unconsciously making certain decisions about what to shoot and how to shoot that now looking back made sense. At the time I wasn’t sitting there thinking that this guy is going to beat this girl up.

What were some of the signs that you picked up in the photos?

He was isolating her. That’s a big one. He moved pretty far away from her family and friends and controlled her ability to come and go. He had the car keys and if they got into a fight, he would take them away and wouldn’t let her leave. He was always invading her personal space. He couldn’t just let her be. He always had to be in her personal space, physically dominating her, physically dominating the kids. He was in competition with the little boy, which I was conscious of very early on and I thought was very weird.

He had gotten her name tattooed on his neck in really big letters. Initially, I made a decision not to judge that because I wouldn’t go to the Pacific Island and see a tribesman with tattoos on his face and judge him for that. I’m in Appalachia and this is a different culture from anything I’ve grown up with. I approached this with the same openness as I would anything else.

But getting a name tattooed on you like that can be a way of making them feel like they owe you.

And was it early in the relationship?

He got it after they were dating for a month.

Which I thought was interesting considering the fact that in that case, there was a station full of people who didn’t do anything.

All of the other bystanders who aren’t journalists and don’t have to concern themselves with journalistic ethics—why do they escape disapproval?

People also don’t want to feel helpless and they think witnessing something is tantamount to being helpless. But I wasn’t helpless in that scenario. I put myself at risk by sticking my hand in his pocket and physically coming in contact with him that way. I made sure the police were being called. I surrendered the photos to the police and was willing to testify. I didn’t feel helpless at all.

I know you went to see Maggie in Alaska. Can you give us an update on how she is doing?

She’s doing better than she was. It’s still really difficult for her and she has to do some work to sort through it. Her husband who she was estranged from when he was with Shane—they’re both young and they have a lot of history together. They met when they were 14 and got pregnant at 15. They care about each other a lot but they have a lot of stuff to deal with.

I know that you sort of stumbled into this topic by accident but do you plan to continue to pursue domestic violence as a subject?

It’s tough to answer because it is a thing you just have to be there for. I want to use this story to do work and I’d love to do some work with some battered women’s shelters, but it’s not going to be the only subject I ever document. I have a particular interest in gender issues but they range pretty widely. I already know that whatever I do in the future, this piece of work will be a pivotal body of work within my career.

Previous columns: Misogyny in Israel—and Not Just at the Western Wall