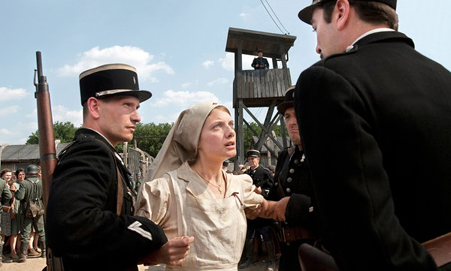 One of the elements that, however unintentionally, makes foreign films produced about the Holocaust so effective is that each face is unrecognizable, and audiences aren’t too busy looking for stars in the cast to distract from the monumental nature of its content. That was the crucial difference between the first two major films about Sept. 11—United 93 and World Trade Center—where the former succeeded in creating a tense, claustrophobic environment with mostly unknown actors and the latter flopped by casting Nicolas Cage in a central role, diminishing the severity of the situation.

Other times, actors have become famous as a result of their breakthrough roles in Holocaust movies, namely Ralph Fiennes for Schindler’s List and Adrien Brody for The Pianist. Eagerly pointing out a familiar face can feel inappropriate, even uncomfortable, when witnessing a cinematic recreation of the horrors of the Holocaust. It can sometimes be difficult to separate these performances from their other memorable roles, be they in romantic comedies, action movies, or dramas, a similar phenomenon to what Starlee Kine noted about TV show actors in the New York Times Magazine earlier this year.

Rose Bosch’s La Rafle, the true story of the roundup of French Jews by French police in 1942, represents an interesting contradiction. Among the Jews portrayed in the film, the only one likely to be recognized by American audiences is non-Jew Jean Reno, star of Leon: The Professional. Then there’s Mélanie Laurent, first seen in the United States as Jewish movie theater owner Shoshanna in Quentin Tarantino’s Holocaust-set Inglourious Basterds. In La Rafle, however, Laurent doesn’t play a Jew. She portrays a Righteous Gentile, the Protestant nurse Annette Monod, who is not content to stand by and witness the mistreatment of the Jews.

Casting what may be the most well-known French-Jewish actress working today as a non-Jew in a film about Jews is an intriguing move. Like the devastating shot of the red coat that serves as the sole instance of color in Schindler’s List, Laurent’s Monod is the face that American audiences will notice most throughout the film. She represents the crusade against injustice and persecution, while the Jews in the movie are largely nameless and anonymous. Recognizing Laurent enhances rather than detracts, since she is a capable actress with a proven track record of playing someone who stands up for her beliefs and for good. Connecting her with Inglourious Basterds helps to contextualize the setting of the film, which tells an important story of one country’s complicity in the Holocaust that deserves to be seen by audiences worldwide.