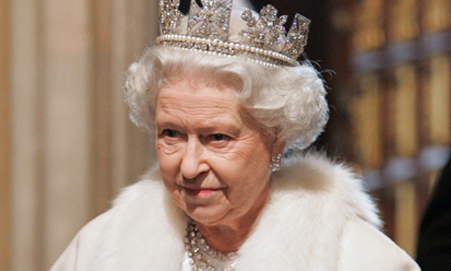 Today in Tablet Magazine, 2010 Big Jewcy Rachel Shukert takes on the suspicion that might have (or might not have, who knows) been nagging you during the Olympics Opening Ceremony on Friday: has the Queen of England become the world’s bubbe?

Most 86-year-old women, whatever their ethnic persuasion, do not arrive at important events via helicopter parachute, escorted by a hot piece like Daniel Craig; many of them can’t even stand up in the shower anymore. But everything else, from the ongepotchket peach lace dress to the passive-aggressive “oy, mein back” shuffle to the seats to that face, seemingly caught constantly in mid-kvetch, saying “For this you made me come out in the middle of the night, sitting outside in the rain like a dog?” Not a trace of her former impersonal friendliness, of smiling Gentile stoicism, remained. At the Olympic opening ceremony, somewhere in between the coal miners performing a Dickensian rendition of the “Stool Boom” number from Waiting for Guffman and the interpretive dance salute to the National Health Service, Her Majesty, Queen Elizabeth the Second, became the whole world’s bitchy Jewish bubbe.

Frankly, we see this as a wonderful development, since Jewish grandmothers are, in our opinion, just about the best thing ever. So welcome, Queen Elizabeth the Second, to team bubbe.