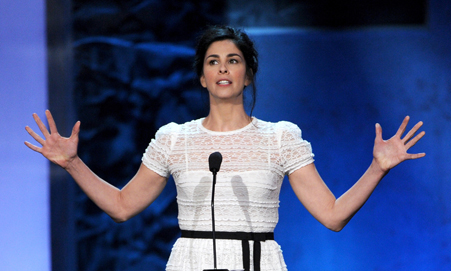 On paper, Sarah Silverman and Susan Silverman could not be more different. One is a famously provocative comedian living in L.A., the other an activist rabbi living in Israel. (“I’m godless and she’s godfull,” is how Sarah succinctly and irreverently puts it.) But a profile in The Daily Beast reveals that the sisters share a political sensibility which runs in the Silverman family—one that has led Sarah, 43, to launch two Great Schlep campaigns, and Susan, 50, to become a prominent member of the Jewish feminist group, Women of the Wall:

“Our mom is a big brain—very passionate and opinionated,” says Sarah. “She always had buttons on her purse and her overalls (yes, overalls) that said stuff like ‘question authority’ and how the military should have a bake sale and schools should be funded, ‘We have met the enemy and they are US’—you know, that stuff.  And our Dad is also outspoken, very liberal, very funny.  He calls himself a reverse snob. He’ll heckle people: ‘Nice Rolex. That could probably feed a whole town in India—but good for you. I love my Timex—it was $35 and it can go underwater!'”

What’s really touching is how supportive and fond the sisters are of each other (there are four in total). Susan thinks of Sarah as someone who is “carrying on the prophetic tradition, of just pouring out truth and justice.” Sarah recalls that when Susan was in rabbinical school in New York City, “she never left her tiny apartment without a bag full of peanut butter and jelly sandwiches and dollar bills.”

These days, Susan is an advocate for religious pluralism and refugees’ rights in Israel. When she and her daughter Hallel were arrested last year for wearing tallits and reading Torah at the Western Wall (something only men are permitted to do at the sacred site), Sarah tweeted her support in here characteristically ribald language: “SO proud of my amazing sister @rabbisusan & niece @purplelettuce95 for their ballsout civil disobedience. Ur the tits!”

Apparently the youngest Silverman has been talking this way since she was very little. Once, when offered some brownies by their grandmother, four-year-old Sarah responded, “Shove them up your ass, Nana.” Susan says, “She didn’t know what she was saying, really. She just knew that it was crude and her adorableness saying it was going to be funny.”