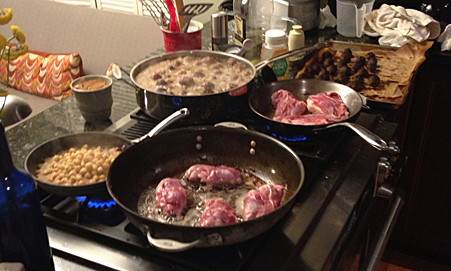 The clock suddenly read 7:25 p.m. and every burner on the stove was going full blast. My chef’s uniform had been accidentally left behind at my parent’s house, so my plan had been to change into a respectable outfit of all black before the guests arrived. But with five minutes to go until service, there was no time.   It was the first event of my new kosher pop-up supper club, Rimon Chicago. A pop-up, or “underground,” supper club is kind of like a restaurant that only opens once in awhile. Pop-up supper clubs have been increasing in popularity over the past several years, taking on a number of different forms, which share the central themes of impermanence and a kind of reckless creativity. Chef Ludo Lefebvre, a French transplant to LA, has been credited as the originator of the pop-up concept. His operation, LudoBites, started in 2007 and has been described as a “touring restaurant” which opens for a week or two at a time in secret locations. Pop-ups are filling both practical and emotional gaps left by the established restaurant industry. They allow chefs who don’t have the financial resources or sometimes the culinary training to open a full-scale restaurant to see if there is a market desire for the goods they have to offer. Temporary operations also give professional chefs the opportunity to experiment in ways that a full-time kitchen can’t afford.

There is an ongoing, at times vitriolic debate about “food as art,” which is another lengthy discussion on its own. For the moment, I will venture the opinion that the pop-up is the culinary world’s version of installation art. The ephemeral quality of the pop-up lends it an air of exclusivity and creativity that established restaurants can’t capture.

In the niche market that is kosher cuisine, pop-ups are increasingly becoming a popular alternative to visiting the same old restaurants time and again. In the New York area, clubs like The Hester combine creative food with new musical talent. Others, like the tasting menu events from Manna Catering and the Texas-style smokehouse from Gemstone Catering, are aiming to showcase a new level of kosher culinary expertise.

For all kosher pop-ups, there is the added value of increasing what are sometimes very limited options for high quality meals. When I moved to Chicago a year and a half ago, I came with expectations of big city living that had been built from stints in New York and Jerusalem. I looked forward to sampling the kosher cuisine of a new city, as I do whenever I find myself somewhere with a large Jewish population. After my first few months here, however, I realized Chicago has a different type of Jewish life than other big cities. While Jewish cultural experiences abound in different forms throughout the city, high quality kosher cuisine has yet to make a lasting imprint. I wondered whether it was a lack of demand or simply a lack of effort. I decided to start Rimon Chicago as an experiment, to see if there were other kosher keeping Jews like myself in Chicago who wanted an interesting culinary experience.

I dusted off my degree from the Jerusalem Culinary Institute and got to work. The name Rimon, which means pomegranate in Hebrew, came from my love of the fruit and its many diverse culinary applications. I particularly love Middle Eastern cuisine, and the pomegranate features prominently in many dishes both sweet and savory. I also used the Middle East as my inspiration for the first menu. I developed six courses that spoke of the Middle East in some way, either through spice, flavor, star ingredient, or even color. Some were more directly influenced, like the starter of charred eggplant, tehina and pomegranate reduction with homemade lavash. Others, like the Mediterranean ceviche with fresh tuna, ginger, and Turkish olives, or the cardamom-coffee chocolate truffles, borrowed components from the region and infused them into recipes from other parts of the world.

Once we got the word out about Rimon, it became quickly apparent that I wasn’t the only kosher-keeping Jew in Chicago craving some good food. Reservations came in from people I had never met in other parts of the city. But the practicalities of setting up our first event almost led to the end of Rimon before it even started. Running a kosher supper club presents a range of unique challenges. For example, there is absolutely no place to get kosher duck breast in the Chicagoland area. After days of back and forth between vendors in New York and Maryland, arguing about exorbitant shipping costs and details of various products, the duck breasts arrived via plane, escorted by one of my two Rimon collaborators whose day job had conveniently taken him to New York the week before our event.

Another interesting predicament was the location. Generally, supper clubs favor venues that are off the beaten path: an abandoned building, an artist’s loft, a hidden garden. But because of our need for proximity to a kosher kitchen, the options were slim. For the first event we decided to stay close to home and host the crowd in my living room.   As we geared up for the first event, everyone around pitched in to lend a hand. Tables were shlepped in (and up the two flights of stairs in our walk-up) by my husband. My mother, coincidentally in town for a few days, entertained my three-month-old son while I cooked. Rimon became something like a mom-and-pop joint that serves spiced lamb and handmade truffles.

The minutes ticked down to 7:30 on the big day. One of my Rimon collaborators got his cocktail station ready with all the ingredients for his “Maxwell Street,” a shockingly delicious concoction of artisanal bourbon, Manischewitz, pomegranate juice and bitters. I manned the stove, searing off as many duck breasts as possible to keep the smoke and sizzle from my open kitchen to a minimum once our customers arrived. Suddenly the doorbell rang and we were off! From there the night was a happy blur of pouring drinks, rushing to plate course after course, and best of all the fantastic buzz of conversation and laughter that makes up a full and satisfied crowd.

1. Set your oven to 500 degrees. Wash and dry the eggplant, and then poke several holes all over it with a knife or fork. Place the eggplant on a baking tray and roast it for an hour, turning every 20 minutes or so. Resist the temptation to remove it once it seems to be burning. This charred flavor is integral to the dish.

2. While the eggplant is cooking, prepare the tehina and pomegranate reduction. Add a couple tablespoons of water at a time to the tehina paste, whisking thoroughly, until the paste has changed consistency and color and is a smooth off white, about the consistency of pancake batter. Add in the tablespoon of lemon juice and salt and pepper to taste.

3. In a small saucepan, mix the pomegranate juice, sugar, and 1 teaspoon lemon juice. Bring to a boil while stirring occasionally and then reduce heat slightly. Continue to stir occasionally until the mixture has thickened and coats the back of a spoon. Remove from heat and let cool completely (it will continue to thicken as it cools).

4. Take the eggplant out of the oven and let it cool. Once it’s cool enough to handle, cut it open ans scoop out the flesh, discarding the burnt peel. Place the flesh in a colander and let it drain for 30 minutes if you have time. If not, that’s ok also—the flavor will just be slightly less concentrated.

5. Spread the tehina on a serving plate and drizzle the pomegranate reduction around the edges. Mound the eggplant in the center of the plate. Sprinkle with chopped parsley and serve with a flatbread or lavash crackers.

Ariel Pollock is the founder of Rimon Chicago, a new kosher pop-up supper club. The next event will be ‘CHINESE’ ON CHRISTMAS, on Dec. 24, 2012. Reservations can be made by emailing rimonchicago@gmail.com.

Ariel Pollock is the founder of Rimon Chicago, a new kosher pop-up supper club. The next event will be 'CHINESE' ON CHRISTMAS, on Dec. 24, 2012. Reservations can be made by emailing rimonchicago@gmail.com.