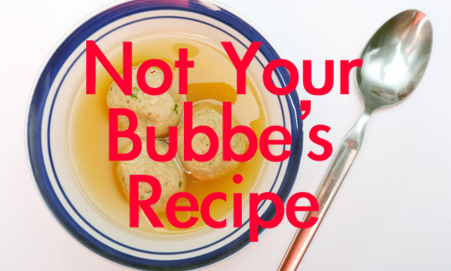 Bubbes are magical, and luckily, not mythical, creatures. Long before J.K. Rowling created Bert Bott’s Every Flavor Beans or Butterbeer, bubbes were creating matzoh ball soup to fill your stomach and warm your soul. We might not have lightning bolt scars, but we have kneidlach.

Everyone has their own version of the dish. Some make it with noodles, others like their matzoh balls the size of bowling balls, and then there are those who prefer more vegetables then liquid. Let’s not forget the timeless debate over floaters and sinkers—the question of whether matzoh balls should be fluffy and float above the soup or dense and sink to the bottom of our bowls.

Ultimately, it doesn’t matter what side of the argument—there’s a reason why Jewish delis may not abide by the traditions of kashrut, but observe the tradition of matzoh balls with the utmost strictness. While it is often served on Passover, the cold winter days are prime matzoh ball soup season.

Growing up, my mom would ask my sister and me each week what we wanted featured on the Shabbat menu, and matzoh ball soup was always on the top of the list. During the winter months, we told our mom that we wanted soup to warm us up. During the summer months, we claimed it was hot outside so we wanted it to be hot inside too. That’s because matzoh ball soup is magic. When you eat it in the winter, it transfers you to a better place, like your bubbe’s kitchen perhaps. So why not become her favorite grandchild and take her and that soup on an exotic vacation—like the Caribbean!

That’s exactly what this recipe does. By adding some traditional Caribbean ingredients like coconut milk and cinnamon, you’ve boarded the plane. This recipe is a play on your bubbe’s traditional soup served Friday night and a pumpkin chicken soup served in Jamaica every Friday afternoon. It has matzoh balls much like the ones you remember eating at the Seder but the ginger and fresh coriander leaves help create a new memory. Instead of just having chicken in your pot, this recipe adds some fresh pumpkin, a handful of spices, and coconut milk in order to create a refreshing new chicken broth.

The flavors in this dish are much more powerful than the traditional bland chicken soup, and show just how much can be done with a timeless classic in the modern kitchen. Caribbean food is big on strong spices that can sometimes be a bit intense for some, the coconut milk not only helps cool down the soup but also provides an interesting flavor not often found in matzoh ball soup. The soup emits a powerful aroma that will fill your kitchen not only with its scent, but with hungry customers.

Not Your Bubbe’s Caribbean Matzoh Ball Soup
Serves about 8

1. To make your matzoh balls, whip all your ingredients, except your matzoh meal, together in a medium bowl.

2. Once the ingredients are combined well, add the matzoh meal. Be careful to mix your batter evenly in order to prevent clumps of matzoh meal sticking to the sides.

4. Once you are ready, boil a medium pot of salted water. After it reaches a soft boil, continue by creating balls out of the batter in the palm of your hand.

5. Let your matzoh balls cook in the boiling water for about 40 minutes or until they have nearly doubled in size and are floating above the water’s surface.

6. While you wait for the matzoh balls to cook, start preparing your soup. Set a large pot over a medium heat and toast your spices until they become fragrant.

7. Add the shallots and garlic to the pot. Cover the pot and cook them covered until they begin to soften.

8. Add the rest of the soup’s ingredients to the pot and allow your soup to reach a soft simmer.

9. Add your spiced matzoh balls to the pot in order for them to absorb some of the soup’s flavors.

10. Cook your Caribbean chicken soup broth for about 40 minutes, until the pumpkin has softened.