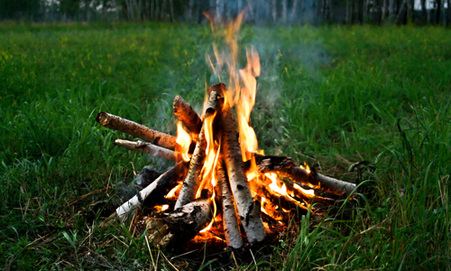 Among the many perks of attending my Jewish day school in Ohio was the school-wide color war known as Maccabiah. An artful blend of competition, education, and student leadership, it was the perfect way to celebrate spring’s arrival and, of course, Lag B’Omer—the 33rd day in the annual counting of the omer between Passover and Shavuot. I still remember my first year participating, dressed head-to-toe in green and cheering nonsensically in Hebrew. My cousin, a sixth grader, was one of our team captains and when we won, he lifted me on to his shoulders in celebration—I had never felt so cool in my seven years of life.

While its contemporary manifestation, which takes place this Sunday, is largely characterized by similar celebrations, mostly in the form of outdoor bonfires, Lag B’Omer has a complicated history. In the Bible, this period between Passover and Shavuot was marked by a barley offering made at the Temple in Jerusalem, which permitted ancient Jews to eat grains from the new harvest. In the first century, the omer period was characterized by a plague that decimated Rabbi Akiva’s students. There are various opinions, but either the deaths stopped on the 33rd day or there were only 33 days of death, but Lag B’Omer, or the letters lamud and gimmel which add up to 33 in gematria, was designated as a day of celebration.

But the Lag B’Omer traditions don’t stop there. After the death of thousands of his students, Rabbi Akiva chose to only teach five men; one of them, Rabbi Shimon bar Yochai, the author of the Zohar, died on Lag B’Omer. To this day, per Shimon bar Yochai’s request, thousands converge on his grave in Meron to celebrate his life with bonfires, singing, and eating. The bonfire is said to be attributed to the idea that his spirituality was a light to the world that he left behind.

Though Lag B’Omer has plenty of stories behind it, unlike every other Jewish holiday, it doesn’t have much of a food tradition. Capitalizing on the festive spirit and bonfires, I’m going to start a new food tradition here and now: the Lag B’Omer s’more. Anyone who has gone camping knows the diversity of delicious foods that can come from cooking over an open fire. From assorted vegetables and cheese wrapped in tinfoil to hot dogs grilled on a stick, the possibilities are numerous and delightful. But, of course, the quintessential bonfire treat is the s’more.

There is a fine art to roasting the perfect marshmallow. I say art because there really is a range of tastes—some like it charred, others prefer a pale golden hue, and there are those who like a robust brown. A lot of people hate on Kosher marshmallows, but I’ve found that there’s little that can ruin the graham cracker-melted chocolate-toasted marshmallow combination. But there are certainly ways to take it to the next level. Peanut butter is a natural friend of the graham cracker and with all of the childhood memories coming up, the most fantastic innovation that came to mind: adding peanut butter and Oreo to the mix, a la Parent Trap. As if s’mores weren’t already sweet and sticky enough! The warmth of the marshmallows softens the peanut butter into a salty-sweet mess and the Oreos add extra crunch … and chocolate.

Method 1: Place one square of chocolate on half of a graham cracker and top with toasted marshmallow. On the other half of the graham cracker, spread a thick layer of peanut butter and sprinkle with crushed Oreos. Put the two halves together.

Method 2: Place one square of chocolate on half of a graham cracker and top with toasted marshmallow. Spread a thick layer of peanut butter on an Oreo. Put the Oreo, peanut butter face down, on top of the marshmallow.

Not Your Bubbe’s Spelt Honey Challah

Not Your Bubbe’s Kosher for Passover Flourless Cake