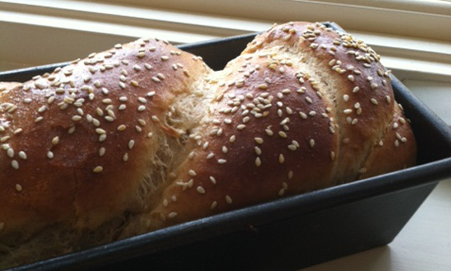 According to the makers of Temp Tee Whipped Cream Cheese, people start experiencing “matzah fatigue” around the third day of Passover. At about the same time (if not sooner) they start dreaming of chametz. So now that Passover is hours behind us, it’s time to get elbow deep in the stuff you’ve been deprived of for eight whole days—and what better way to do that than with challah?

Challah making and bread baking is a tradition that spans millennia, but it’s a process that’s constantly being updated. From the development of new milling and grinding techniques to the commercialization of shelf stable yeast, breads are always changing their shape, color, and composition. According to Gil Marks in The Encyclopedia of Jewish Food, challah as we know it today—doughy, sweet, and made of white flour—is a fairly recent invention. For 2,000 years, the term challah actually referred to the small piece of dough that is taken out of each batch and burned.

Over the last several centuries, as Jews moved around the globe and experienced new cuisines and accessed new foods, the bread they served on Shabbat evolved. While historically, most Jews used the same bread for Shabbat and the rest of the week, some began to exclusively use white flour to make bread fit for royalty, in this case the Sabbath queen. This custom became so prevalent that some communities would make sure to provide white flour for poor families that could not afford the expensive ingredient.

The customs surrounding challah go beyond the recipes behind it. According to Marks, “In certain Sephardic communities, especially among Syrians, pieces of the Sabbath bread are tossed to the various diners, reflecting the concept that food actually comes from the Lord, not the host.” Ashkenazim typically slice their loaves with a knife. Some families developed unique braids and shapes in order to distinguish their loaves from others’ in the communal ovens. Some Jews sprinkle their loaves with seeds in an effort to recall the manna the Jews received in the dessert.

This Shabbat, the one that comes right after Passover, has it’s own particular challah custom, known as schlissel or key challah, albeit one that is observed by a small portion of the Jewish community. This custom stems from the tradition that the Israelites entered Israel around this time of year, at which point the manna stopped falling and they began subsisting on produce. To commemorate this and acknowledge that our key to sustenance is in God’s hands, there is a custom of baking challahs in the shape of a key, embedding an actual key into your loaf, or cutting the bread with a key.

To compensate for last week’s challah-less Shabbat, this challah recipe is unique for other reasons. In keeping with the latest trends of baking with whole grain flours, this dough is dominated by spelt flour. According to Kim Boyce in Good to the Grain: Baking with Whole Grain Flours, spelt is actually explicitly mentioned in Exodus because it was not affected by the 10 plagues. Compared to heavier grains like buckwheat, spelt is mild and a bit tart. It’s also very easy to work with, making it a good “gateway” whole grain flour.

Because it’s already a slightly sweet flour, this recipe calls for honey, which is a more earthy sweetener than white sugar. The dough bakes into beautiful loaves with a nice crust and soft insides. And to spice things up, and drawing inspiration from Deb Perelman’s fig, olive oil, and sea salt challah in The Smitten Kitchen Cookbook, this recipe also calls for a fig rosemary swirl inside the dough. The flavor and structure of the bread certainly don’t need the filling, but it takes an otherwise fairly standard challah to new heights—something you definitely deserve after a week of matzah and mediocre baked goods.

Directions for dough in a stand mixer:

1. Mix yeast in the bowl with 1 cup all-purpose flour and 1 cup warm water. Allow the mixture to sit and puff up, about 15 minutes.

3. Add 1 tablespoon salt, 3 cups spelt flour, 2 cups all purpose flour. Turn the mixer on low for 5-10 minutes, until soft and smooth. You may need to add up to ¾ cups more of all-purpose flour.

4. Place the dough in an oil-coated bowl, cover with plastic wrap or a clean towel. Let the dough rise for two hours or until doubled in size.

Directions for kneading dough by hand:

1. Mix yeast in a bowl with 1 cup all-purpose flour and 1 cup warm water. Allow the mixture to sit and puff up, about 15 minutes.

3. Add 1 tablespoon salt, 3 cups spelt flour, and 2 cups all-purpose flour and mix with a wooden spoon. Turn the dough out onto a lightly floured surface to knead. Add reaming ¾ c AP flour gradually as you knead, if needed. Knead until soft and smooth, about 8-10 minutes.

4. Place the dough in an oil-coated bowl, cover with plastic wrap or a clean towel. Let the dough rise for two hours or until doubled in size.

1. In a small saucepan, combine figs, orange juice, salt, water, and rosemary. Let the mixture simmer over medium to medium-high heat for about 10 minutes, until the figs have softened.

2. Allow the figs to cool and then pulse in a food processor until the mixture has formed a paste.

1. When the dough is done rising, divide the dough into desired number of loaves.

2. Roll the first portion out on a lightly floured surface into a rectangle that is about ¼ inch thick.

3. Smear the dough with the fig spread, leaving a 1-inch border on all sides.

4. Loosely roll the dough up, like a carpet. Fold the rolled dough in half and twist the sides to form a braid-like loaf. Repeat with the remaining dough.

5. Place loaves on two parchment-lined baking sheets. Cover with plastic wrap or a clean towel and allow the loaves to double in size once more.

6. Thirty minutes before baking, place the oven racks in the upper and lower third rungs of the oven, and preheat to 350°F.

7. Brush each loaf with an egg wash using the last egg. Sprinkle with sesame seeds if using.

8. Bake loaves for 30-40 minutes, until the top is a golden brown and the bottom sounds hollow when tapped.

Not Your Bubbe’s Kosher for Passover Flourless Cake

Not Your Bubbe’s Egg Salad Frittata