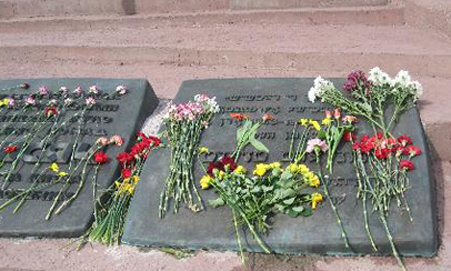 It’s warm now in Kiev for the first time since the waning days of September, and the population of my working-class neighborhood is shedding its winter coats. The crocuses are emerging, the stray cats are bolder than ever, and it is a perfect day to take a walk in the park: specifically, the one on the corner of Olena Talihi and Shusieva Streets—the one that also happens to contain the infamous ravine known as Babi Yar.

My neighborhood, colloquially known as “Dorohozhichi,” after the metro stop that bisects the Babi Yar memorial park, is not far from the center of Kiev. Take the subway two stops from Zoloti Vorota (the Golden Gate), on the city’s central hill, and you will arrive here, amid a cluster of food kiosks and beer tents. Yevgeny Yevtushenko once wrote that one can best get to know a city by studying its “coarse and sorrowing outskirts,” but life here is no more coarse or sorrowful than anywhere else in the city; the strains of Russian pop can be heard on the air, playing on teenagers’ cellphones, and on the corner you can buy wilting bouquets of green onions, strings of dried mushrooms, and 50-cent packs of Belomorye cigarettes.

A steady stream of people gets off at the Babi Yar bus stop, flocking to the kiosks, fumbling for their lighters. Mothers take their still-bundled children by the hand, and lead them over a rustling carpet of poplar leaves, just recently revealed by melting snow. And on the sunny concrete slope that forms the base of the Babi Yar monument, a middle-aged man is giving an impromptu drum lesson to a teenage student. This is the place where, 70 years ago, the largest single mass killing of the entire Nazi terror campaign took place, and the site of countless smaller massacres. And it’s where I live.

I never meant to live here. Although I came to Ukraine as a student of Jewish history, and ready to face the necessary hardships of life in the “Old Country,” I never imagined that I would be faced with the past so dramatically every day, on the way to the subway, the pub, and the grocery store. But, thanks to the vagaries of Kiev real estate—and the exhaustion that followed surveying weeks and weeks’ worth of grim, unfurnished apartments—my roommate and I moved in to a cozy two-bedroom flat with a little well in the courtyard, and an excellent stove … that just so happens to result in me giving “Babi Yar” as the primary navigational landmark for my house.

Although an estimated 100,000 to 150,000 people were murdered here over the course of the Nazi occupation, the most infamous incident at Babi Yar was the murder of 33,771 Jews over two days in September 1941. I had heard of the events at Babi Yar long before I arrived in Ukraine for my Fulbright scholarship: Yevgeny Yevtushenko’s poem about the slaughters, a courageous and poignant expression of solidarity with the Jewish people, is justly one of the most famous Russian poems of the 20th century. And no study of the Holocaust is complete without detailing the incident, which arguably instilled the Einsatzgruppen with enough confidence to engage in their campaign of devastation without fear of repercussions for the remainder of their occupation of Eastern Europe.

There are few eyewitness accounts of the massacre at Babi Yar. One of them is the story of Dina Prochineva, a Kiev actress, recounted leaping into the ravine before she could be shot, then staying perfectly still as the Nazis finished off the wounded. That night, she clawed her way up out of the piles of bodies, up through the earth covering the mass grave, later to relate her experiences to the novelist Anatoly Kuznetsov.

The park at Babi Yar is filled with monuments. The largest, standing at the lip of the ravine itself, was erected in 1976, 35 years after the massacre. It is dedicated to “Soviet Citizens and POWs,” testimony to the widespread reluctance of Soviet authorities to specifically reference the race or religion of those who perished during World War II. (Other Soviet memorials at massacre sites, even those whose victims were exclusively Jewish, also reference “Soviet citizens” exclusively.) Others, smaller and more modest, are nestled between trees or in small clearings around the lip of the ravine, as if ready to be discovered by chance. These memorials, built since the fall of the Soviet Union, pay testament to the international character of the violence at Babi Yar. A memorial plaque in dark marble commemorates the Roma of five gypsy camps liquidated at the ravine; an oak cross, dedicated to the 621 Ukrainian nationalists executed there, stands beside a small Jewish memorial, testament to the equalizing nature of indiscriminate violence. (The Organization of Ukrainian Nationalists, whose members are interred at Babi Yar, engaged in virulent anti-Semitic propaganda, and participated in widespread pogroms.) A children’s memorial features a girl with outstretched hands; beside her, a doll in jester’s clothing slumps down towards the earth.

How do you live in a bloodland, a place shaped, stained, by history? I came to Ukraine to better understand that question; living where I do has literalized it, and made it part of my daily life. My roommate, Lena, who works for the Jewish Agency in Kiev, says she’s begun to make jokes about our address: “Come visit me if you want to see some living Jews at Babi Yar!” We’ve talked about arranging a literary evening at the park, reading poems and engaging in discussion with our Kiev friends and acquaintances. But mostly we go to work, and back, and to the corner store. The Soviet-era TV tower that looms over the park blinks at us all night. In winter, the snowy ravine is cut throughout by sled-tracks, and the poplar alleys in the park bear the marks of cross-country skis. These days, people take their lunches from nearby offices, and sit in the sun; teenagers flirt over Zhigulovsky beers, and weary parents settle back against the ravine’s edge, watching their children play along its bottom.

When Yevtushenko wrote his poem to Babi Yar, no monument had yet been built – “a steep cliff only, like the rudest headstone,” stood there. Still, he felt the trees and grasses “screaming silently.” These days, perhaps the most common sound at Babi Yar is laughter, or footsteps, the various small sounds of people passing through on their way home from work, or lingering in the grassy clearings. For those who come to visit Babi Yar to pay their respects—people from all over the world–it’s hard not to shudder at that laughter, or feel, at the sight of the people who come here to barbeque outdoors in May or roller-skate on the lumpy pavement, a sense of pure outrage. But for the inhabitants of Dorohozhichi, a landscape shaped as much by memory as by wind, or rain, or pavement, living at Babi Yar is just that—living.

Talia Lavin is a recent Harvard graduate and aspiring novelist. She is currently on a Fulbright grant in Ukraine, where she hopes to get used to pickled herring, pelmeni, and pit toilets. You can read more about her Ukrainian (mis)adventures here.