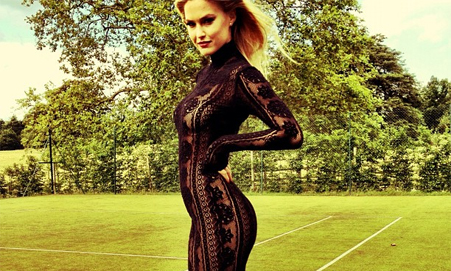 Another one- for a special friend instagr.am/p/NwAEGjMUZx/

Israeli supermodel and Twitter enthusiast posted a picture of herself modeling a lace bodysuit, with the cryptic—and somewhat counter-intuitive—message, “for a special friend.” In the image, our girl Bar is standing on a grass tennis court, possibly a reference to the London Olympic Games, which she attended with snowboarder Shaun White.

Just who is this special friend? And why does Bar think she needs to tweet sexy photos to get someone’s attention? And couldn’t she just have sent a text? Jewcy’s Bar Refaeli Investigative Squad (BRIS) is on the case.

Jewish Grandmother Leaves Most Adorable Voicemail Ever For Gay Grandson

Bar Refaeli is Alone and No One Knows Why