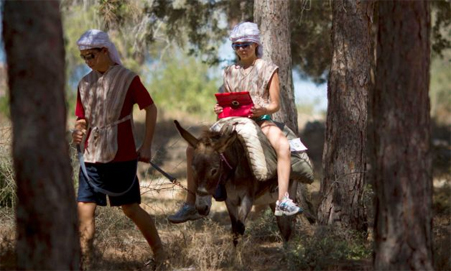 Visitors to Kfar Kedem, a biblical-themed tourist attraction in Northern Israel, get to experience what life was really like during the Old Testament days. Robes, headdresses, donkey rides; this place is the real deal. Not sold yet? Visitors can do all this while staying very, very much in the 21st century, thanks to brand new Wi-Fi routers conveniently “slung around the donkey’s neck like a feedbag.”

The “wireless donkey tour”—which almost sounds more like a ride atop a wirelessly-operated donkey instead of a regular donkey wearing a Wi-Fi router, just saying—is still in its first week, but nine out of 10 mid-ride Facebook status updates seem to approve of the innovation. One happy camper got away from the urban bustle in the scenic hills of yesteryear:

Visitor Peter Scherr accessed the Internet while touring the Galilee hills to do some donkey fact-finding with his family.

“It has been used as a working animal for 5,000 years,” said the New York native, reading from a Wikipedia page on his iPad. “There are more than 40 million donkeys in the world. That’s a lot of donkeys!”

Yes it is, Peter, but we prefer to call them asses.