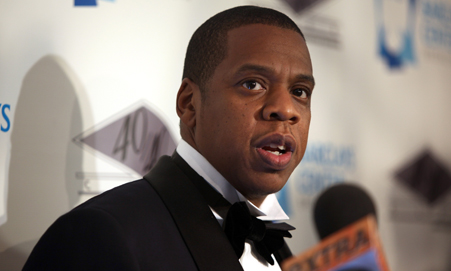 Jay-Z is serious about this whole Jewish street cred thing. After telling Rolling Stone he was the most powerful Jew in the music industry now that Lyor Cohen (you know, of Dior Homme) left the Warner Music Group, Hov took it a step (or eight) further for his much talked-about concert series at the Barclays Center.

Over at Fuse, Amit Wehle—who lives at 560 State Street—tells the absurdly amazing story of how he ended up providing the menorah that Jay-Z and Co. lit each of the eight nights of concerts. Get it?!

Let me pause to explain what a menorah is for those who may not know: It’s a nine-branched candelabrum lit each night during the Jewish holiday, Hanukkah. It commemorates the re-dedication of the Holy Temple some 2,200 years ago in Jerusalem. Now Jay-Z and his team wanted to light one candle for each night of their eight-concert run, held in their own Holy Temple. So, already feeling a kinship with Hova from my chance living at his old residence, I jumped at the idea.

So yeah, that happened. Dome of the ROC, anyone?

Previous: Is Jay-Z the Most Powerful Jew in the Music Industry?

Watch Three Grandmothers Read the Lyrics to “Drunk in Love”