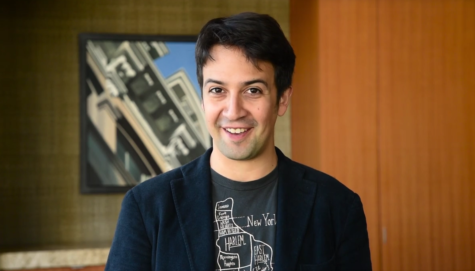 In the video, an enthusiastic Miranda, briefly appearing himself, narrates over footage of YU in action and famous figures associated with the University. He speaks as to what makes the school great, and asks that from noon to noon this week, September 20, to 21, video watchers give money to a matching program that will quadruple each donation. The goal is $5 million.

We have so many questions. Why is Miranda not rapping? Did he write the line about “dreidel spinners?” How long did they have him in the studio? Was this done in one take? Where can we get that t-shirt he’s wearing? And of course, why is he doing this?

There are a few obvious connections. Miranda is, rather famously, from Washington Heights, and he is also the recipient of an honorary doctorate from YU before Hamilton elevated him from theatre great to household name (way to get in on the ground floor there, guys!). Another connection is that Miranda’s mother, Dr. Luz Towns-Miranda is an assistant professor at the Albert Einstein College of Medicine, which the University owned until last year; the medical school will stop giving out YU degrees after 2018.

But aside from all of this, it’s a bit bizarre that the superstar is making this plea for the ailing university, speaking to its “unique” values. Maybe he’s just renewing his Philo-Semite cred (you’re doing fine, Lin. You have like, a decade on the clock before you have to replicate anything like your wedding video).

It’s been a busy few years for the officially Jewish university. As Yair Rosenberg wrote for Tablet:

On the one hand, Y.U. is the flagship of Modern Orthodoxy. It is an institution that fuses high-level religious learning with secular instruction and consistently ranks in the top 50 universities named by U.S. News and World Report. On the other hand, the school has been beset by financial difficulties and management failures, and has come under increasing attack from a right that views it as too modern and a left that sees it as too conservative.

Well if anyone can make a miracle, it’s Lin-Manuel Miranda.