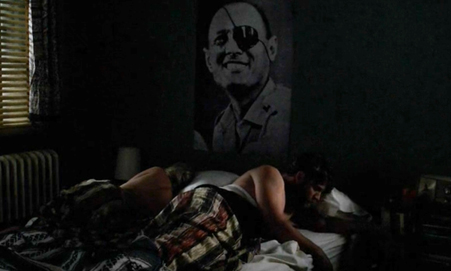 Last Sunday’s Mad Men episode, Favors, was stock full of new reveals. For the first time, Sally Draper saw her father having an affair with (“comforting”) the neighbor. Bob Benson, whom the internet believes to be an investigative journalist/government spy/murderer, came on to Pete Campbell, and conspiracy theories abound. But most important, we got a glimpse of Stan Rizzo’s bedroom—where above his bed hangs an enormous poster of the easily recognizable Israeli military strategist and politician, Moshe Dayan.

We Mad Men extremists certainly like to prophesy what creator Matthew Weiner will do with between 10 and 11 p.m. on Sunday nights. But why was Rizzo reppin’ Israel? Was he paying homage to the Six Day War? Showing some respect for the ever-cool eye patch? Have he and Jewish co-worker Michael Ginsberg been talking Israeli politics and war strategy during late nights at the office?

The truth is that no one ever really knows why Mad Men characters do what they do. But that didn’t stop us from trying to figure it out:

So, what was with life size poster of Moshe Dayan in Stan Rizzo’s bedroom? Was it an homage to “Stardust Memories”? #MadMen #VietcongPoster

So why does Stan have a giant Moshe Dayan poster? My theory is purely superficial: he just really digs the eye patch.

Huh? There’s a Moshe Dayan poster in Stan Rizzo’s bedroom? That seals it: Matthew Weiner is just screwing with us.#CatchingUp with #MadMen

Cameo of the year: #MosheDayan in ep. 11 of #MadMen. Wtf, Rizzo? twitter.com/JudahAriGross/…

Will we see Rizzo’s poster again? This Mad Men fan hopes so.