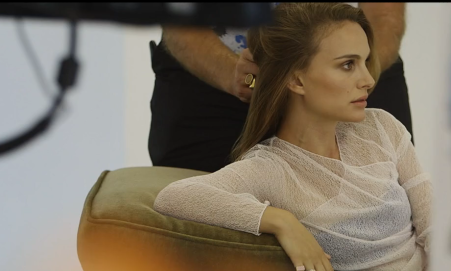 ‘I see it a lot – this romantic view of the world where you fall in and out of love on a whim. It ignores the depth of trying to know another human being and respect them and love them, and puts in its place the excitement of an immediate intimacy. But really knowing some? That is such an opportunity.’

‘I want every version of a woman and a man to be possible. I want women and men to be able to be full-time parents or full-time working people or any combination of the two. I want both to be able to do whatever they want sexually without being called names. I want them to be allowed to be weak and strong and happy and sad – human, basically. The fallacy in Hollywood is that if you’re making a “feminist” story, the woman kicks ass and wins. That’s not feminist, that’s macho. A movie about a weak, vulnerable woman can be feminist if it shows a real person that we can empathise with.’

And, save the best for last, on Dirty Dancing:

‘To this day, it’s the movie that I’ve seen most in my life. “I carried a watermelon”… I can’t talk about it too much, or I’ll start getting teary. There are other movies I love, but no other movie that I have watched over and over.’

Do we smell a remake with Portman? Dirty Dancing: Jerusalem Nights. OK, fine. That’s pretty unnecessary. But, we would all go see it… just saying.