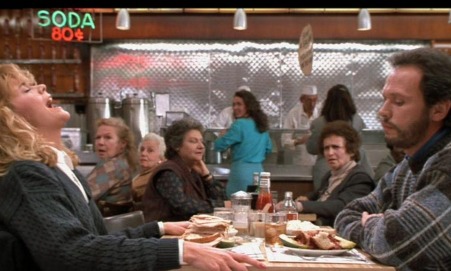 There hasn’t been a scene as cinematically important as Meg Ryan’s fake orgasm in When Harry Met Sally, right? Wrong. What we could have had was a scene of Rob Reiner’s fake orgasm, which we can all agree would be a profound piece of film. You see, on the first couple of takes, good-ol’ Meg couldn’t get her climax right, so—obviously— Rob Reiner showed her how it’s done, according to Billy Crystal on the Today Show.

“Meg was a little nervous, so the first orgasm … so so,” he said. “The second one was like you’re married 12 years. And then Rob said, ‘I want you to do it this way. Like this.’ And he sat down opposite me — so now it looks like I’m on a date with him or Sebastian Cabot — he has an orgasm that King Kong would be jealous of.

The best part is that the extra, famous for the “I’ll have what she’s having” line, was none other than Estelle Reiner, the director’s mother. Yes, Rob Reiner faked an orgasm in front of his mother.