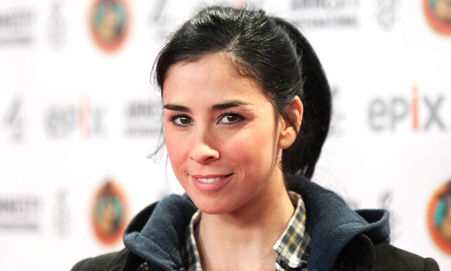 Next week, Sarah Silverman could become Israel’s First (And Funniest) Aunt: her brother-in-law Yosef Abramowitz, a solar power entrepreneur and former journalist, is a candidate in the Israeli presidential election, scheduled to take place on June 10.

The Guardian reports that American-born Abramowitz “has some bold ideas for the presidency,” which include a vegetarian presidential residence, and an electric car powered by solar energy. His resume is impressive: a Wexner Fellowship, two hunger strikes (!), two Pulitzer Prize nominations, three Nobel Prize nominations, an environmentally-righteous tech/social-good start-up, and numerous “most influential” list entries. And, of course, he’s married into one of America’s most famous Jewish families: sister-in-law Sarah Silverman is one of the world’s most beloved/controversial comedians, and wife Susan Silverman is a crusading feminist rabbi. (The Times of Israel reports that he “dreams of having his wife officiate as a rabbi at the country’s first civil marriage and of creating a ‘President’s Talit,’ or prayer shawl, that would be given as a gift to every person who becomes president of a synagogue.”)

Abramowitz’s chances of winning are pretty slim—he made aliyah just eight years ago, and isn’t a household name in Israel the way, say, Dan Shechtman is. And yet, anything’s possible: the Israeli president is a figurehead with no executive power, so the election could yield a surprise result. Abramowitz is counting on the electorate’s political fatigue, hoping that a non-politician who represents “the spirit of vision and technology and Israeli entrepreneurship” will appeal more than a politican who’s been around for decades.

Update, June 6: Abramowitz is no longer in the running. Sorry, folks.