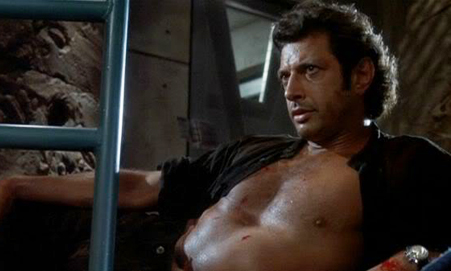 Jurassic Park enthusiast Aaron Glaser went to see Jurassic Park 3-D (a 3-D remake of the original film) with Kerri Doherty of the web series Geeking Out with Kerri Doherty, and the two sat down to chat about the film afterwards. They talked about dinosaur droppings and whether it’s worth dropping $18 to see it in 3-D. They also talked a lot about Jeff Goldblum’s glistening hairy chest, brought to life in a third dimension.

Jeff Goldblum, after all, is a Jewish hero. On Tablet’s list of 100 Greatest Jewish Films, No. 75 is simply ‘Every Jeff Goldblum Movie Ever.’