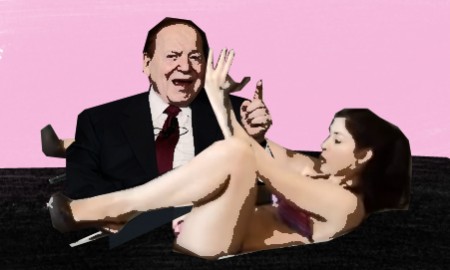 2012 was quite a year for viral videos. From the wacky to the touching to the downright graphic, here are the most memorable Jewish contributions:

2. The School of Rock Remix

Israeli kids cover Taylor Swift’s “I Knew You Were Trouble,” and it is all sorts of awesome.

“Is it the look in your eyes, or is it these dancing Jews?” Isaac Lamb asked girlfriend Amy Frankel in this elaborate song-and-dance proposal. Yes, a million times yes.

Not to be outdone, Eric LaBarre tangoed his way through an even more elaborate musical proposal for girlfriend Nina Sturtz, who he met on JDate. The highlights:

He’s filmed taking the train to her parents house in White Plains to ask for permission—while she’s in Israel on a Birthright trip. Then he tells his mom and brother, two of her friends, and even her ex-boyfriend, and dances in the street with some of his friends.

The Jewish comedian got graphic—for a cause. She memorably offered to scissor gazillionaire Sheldon Adelson if he donated the $100 million he pledged to Romney to Obama instead. We all know how that turned out.