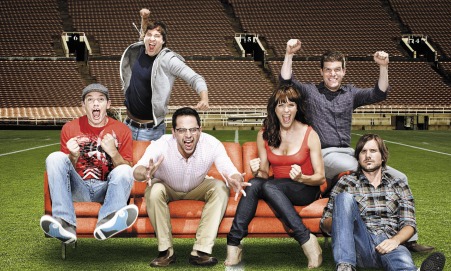 The League is highly entertaining. What it lacks in emotion it makes up for in grand laughs. It’s the kind of show you want to watch when you’re freaking out about something, say, your graduate school’s ostentatious career fair. While everyone is talking and talking and talking about which news magazine’s booth they’re going to attend and impress, you run home and watch an episode of The League under your covers in the dark. It happens…

But, some people can’t relate to the show because of its hyper-masculine plot lines. It is, in fact, a show about fantasy football—the characters spend endless time discussing hefty NFL players, sex jokes are aplenty, and if it weren’t for Katie Aselton’s character (she plays Kevin’s (Stephen Rannazzisi) wife), the female presence on the show would be comprised of hot girls in bars and Ruxin’s (Nick Kroll) sexy but not interesting wife, Sofia (Nadine E. Velazquez).

Football isn’t Julie Klausner’s cup of tea, so when she got together with some of the show’s stars — Katie Aselton, Mark Duplass, Steve Rannazzisi, and Paul Scheer — she put a twist on their show’s concept: Instead of picking dudes to play on fantasy teams, she made them draft fantasy TV-show casts from a long list of television’s greatest female characters. Heated battle ensued.

Watch and enjoy and let Vulture know which team you think will win the ship—maybe they’ll win the Shiva trophy.

Previous: The Most Jewish Episodes Of Julie Klausner’s How Was Your Week Podcast