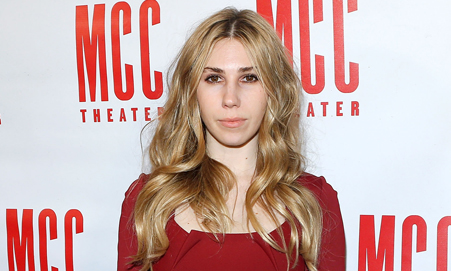 Move over, Zach Braff—there’s a new star turning to Kickstarter for crowd-sourced funding. Zosia Mamet, of Shoshanna fame, and her sister Clara have an indie folk band (because of course) called The Cabin Sisters, and they need a little help getting their first music video made. Like, your help:

This music video for Bleak Love is our chance to realize through the visual artistry of some very talented people the universal feeling of un-requited love. Visually the video will bounce from opulence to sparseness, French Baroque to a simple, timeless and heartbroken. We are hoping to capture something everyone has felt at some point in their lives.

Sadly, the sisters Mamet haven’t been too successful in their quirky, banjo-laden venture (“Perhaps because it includes a ‘body percussionist,'” BetaBeat offered). No word on whether dad David, who once encouraged 25-year-old Zosia to skip college and pursue acting instead—”Thank God one of my children is finally listening to me,” he apparently told her—is one of the project’s 23 backers (the sisters have raised $1,170 so far).

I think the problem here is that people are thinking too small. Sure, for $25 you can download their first album (after all, Shosh would never pirate music) and $100 will get you a signed photo of the sisters, but for only $5,000 you can be Zosia’s date (fine, guest) at a Cinema Society film screening and premiere party: “It is a very classy event that will give you the opportunity to know a little bit about Zosia.” Sure, we don’t know what movie it is and she might totally hate you, but it would be so worth it.

So, have you donated yet? Because Lena totally did.

Zosia is making a very un-Shosh like music video (with a little help from her friends) #cabinsisters kickstarter.com/projects/51216…

Previously: Zosia Mamet Curses, Loves Pirates, and Is Definitely Not A ‘Shoshanna’
Zosia Mamet Reports That Even Off-Screen, Dating in Your 20s Sucks
How Do You Solve a Problem Like Shoshanna?

‘Tzadeikis’: An Intimate and Fantastical Look at the Hasidic World