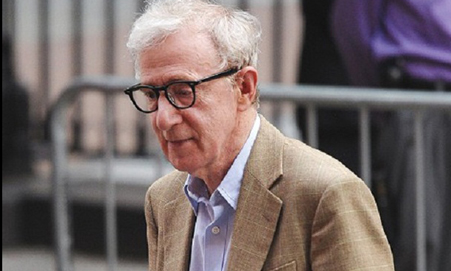 It’s not everyday we get to hear Woody Allen casually muse on the production, story line, and thematic nature of his films.

Then consider us LUCKY that three film critics were invited to Allen’s Park Avenue editing suite for an exclusive sit-down with the renown director to chat about his latest movie, Blue Jasmine, which opened to rave reviews this past July.

The film focuses on the emotional and financial unraveling of a Manhattan socialite, played by Cate Blanchett, who is coming to terms with her husband’s “Madoff-like” investment scandal and his subsequent suicide.

In this in-depth interview, the 78-year-old film guru discusses the genius acting of Cate Blanchett, the woes of the wealthy American elite, and as always, reminds us that his characters are deeply flawed, deeply human, and painstakingly relatable.

Although I highly recommend you listen to Woody’s voice on the sound clips, here are a few highlights from the interview:

Woody’s response when asked if Blue Jasmine was specifically an American story:

“It feels like an American story. I just know these women from this neighborhood we’re sitting in now, who get up in the morning and they’re rich. They go to The Hamptons, to the Christie’s auction, and shopping. And they’re nice people. They do a lot of fundraising for good causes that contribute significant money to hospitals and school things, and they’re decent people. But if the bottom dropped out from them, it would not be easy for them. They’re addicted to a certain lifestyle–it isn’t just having a chauffeur. It’s who your friends are, your embarrassment of it; it felt very American to me. Of course in this country every week you pick up a newspaper, there’s another bank fraud or stock fraud, it is such a common theme.”

When asked if he identified with Jasmine as a character:

“I identify with her problem. I could understand that there are people who would say “I couldn’t careless about her–what did she lose her credit cards, who cares?” It’s deeper than that for me. I feel she’s a human being who made some mistakes and had some tragic flaws in her personality, and because of that it’s sad for her. Yes she deserved to get her comeuppance, but that was too severe. I felt she deserved to be straightened out and get a severe talking to, but I didn’t feel she deserved to bring so much tragedy onto herself. I felt sorry for her. She was a basically decent person who wasn’t looking for trouble, and had some human weakness, and everybody has a certain amount of human weakness.”

“Well, money’s a very tricky thing. Money’s addictive and people don’t know how to handle it very often. It’s not often that people come into gigantic sums of money and handle it gracefully. I know many rich people, and it affects their life, not always in a sinister or cruel way–in fact usually not–but it does affect their expectations and their perspectives on things. I don’t know how many of them could take it if they suddenly had to downsize radically. I know during the depression it was a common joke that people were jumping out windows; committing suicide from losing their fortunes. Max Gordon, the great Broadway producer, lost two fortunes and tried to jump out the window. He was friendly with Groucho Marx, and Groucho lost a fortune, and so did Max. The sudden downsizing was a very troubling thing.

I always think that I could handle it. If I wasn’t earning a reasonable salary-which I do-then I always feel, ‘Don’t worry I could go right back to living the way I did in Brooklyn.’ I’d be fine. I’d just have my shower, and you know…but I wonder, I think I could, but I wonder.”