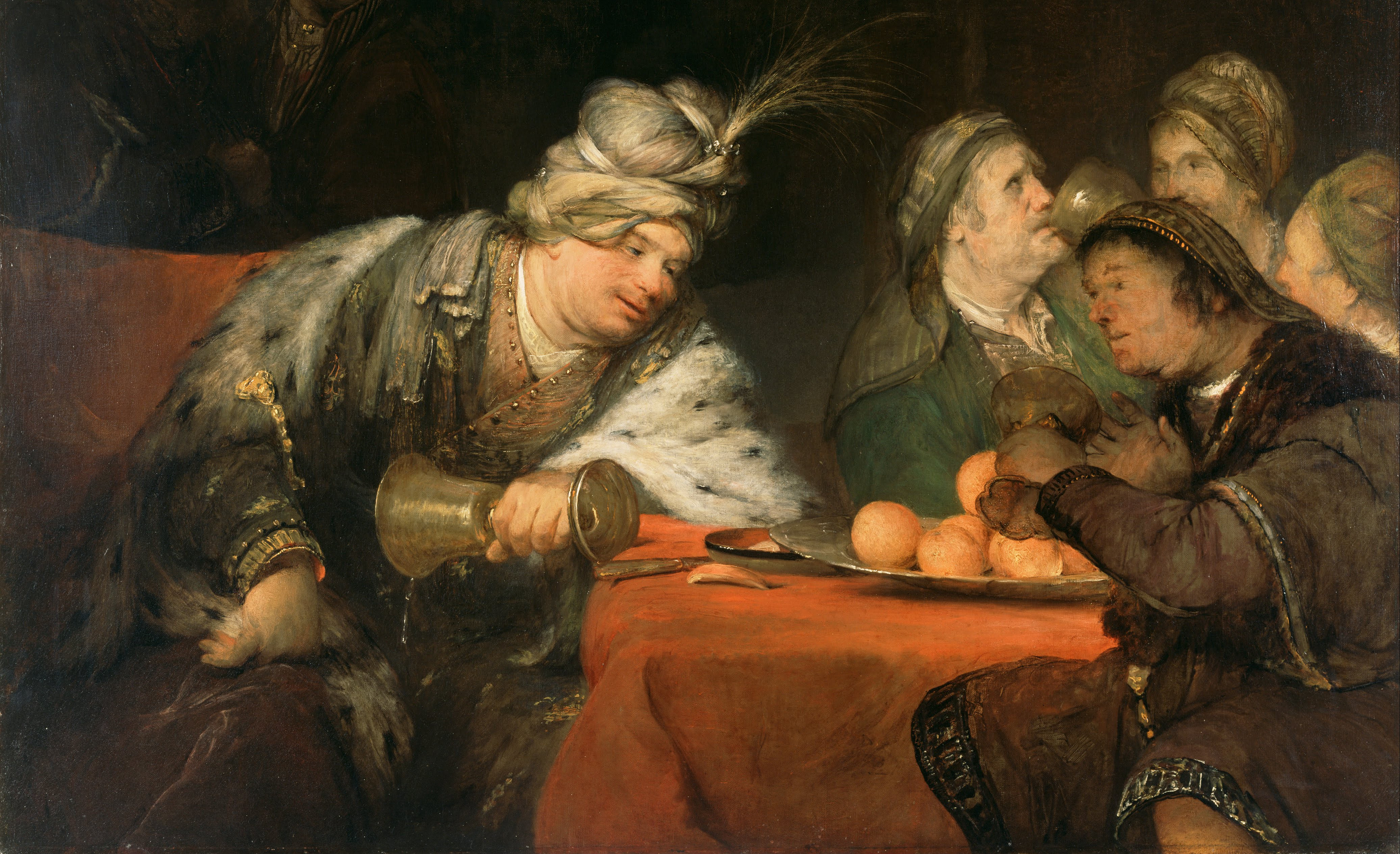 This year, I was at a Purim spiel performed by second graders for their peers (yes, it was adorable). The first time the narrator mentioned Achashverosh, a little girl form the audience started to boo. The adults laughed, and one explained that he’s not the bad guy in this story. Still, for one brief moment it felt like Achashverosh was getting the treatment he deserves.

Yes, Haman is the more malicious character in Megillat Esther, amping up fantasies of petty revenge into attempted genocide. But he’s also straightforward and consistent. He insinuates that he started from nothing, and now he wants everything, and almost has it. He’s egotistical, but cunning and cautious, his ambition at least slightly tempered by common sense. Unlike Bigtan and Teresh, he doesn’t want to overthrow the king, just reap the benefits at being his right hand. Like when he’s forced to honor Mordechai, Haman toes the line when he knows it’s better to bide his time.

Achashverosh, on the other hand, is power and privilege writ large. Haman, it would seem, climbed the social ladder due to some sort of meritocracy, but the king was born into his position. He’s an example of not only absolute power corrupting absolutely, but it creating an absurd monster of a man.

Esther has always been a puzzling character in the Megillah, and her actions sometimes seem convoluted or confusing. Why, for example, does she invite Achashverosh and Haman to two different parties before summoning up the courage to confront them? Even then, her language seems somewhat stilted and restrained. She vocally insists that were only the freedom of her people at stake, as opposed to their lives, she would have remained silent. Esther as a puzzle has inspired analysis and Midrash for centuries. But look at her husband.

Achashverosh is a man who exiled (or perhaps killed) his queen because she refused him one command. He ordered the kidnapping of young girls to be taken as his concubines, ruining their prospects for a normal life. Despite his multitude of women, they would only even see him if he asked for them by name, leaving those he has forgotten to languish in what is essentially a pretty prison. Maybe it would be better to avoid notice altogether, but favor from the king seems to be an important currency— after all, the head eunuch helps Esther find favor because he likes her.

A man who forgot about a person who saved his life, as the king does with Mordechai, is definitely not going to remember the name of every girl he has forcibly taken from her home.

Achashverosh is a man of temper, who acts out like a child when angry, and then reassures himself by being magnanimous later. When Mordechai asks Esther to intervene on behalf of the Jews, she explains that approaching the king without being called risks death, and that he has not asked to see her in a month.

It’s been a month, and the king has not asked to see his queen— a king who disposed of the last queen because he got angry and was surrounded by cronies who egged him on. It seems ludicrous that Esther should be afraid to see her own husband, who chose her so deliberately and above so many others, but who knows what that last meeting was like? What if Esther displeased the king, and felt relieved to escape intact?

Esther knows Achashverosh well, and it’s clear that knowing him means fearing him. He’s a man with power he doesn’t deserve, and it turns him into a monster. Doesn’t that sound familiar?

At the end of the first party, either she falters, or realizes that the moment isn’t right. Achashverosh is unpredictable and all-powerful, and the two combined make him more dangerous than the rest of the Purim characters together, with all their planning and deliberation.

Achashverosh is often portrayed as absurd, a drunken fool who would rather throw parties than pay attention to his kingdom. But he’s a man who has never had to learn empathy, or real consequence. He’s just as likely to condone mass murder as he is to host a feast, and as a result, rules by terror of his dual nature, if unconsciously, like a Persian Bacchus. He treats men as his pawns and women as objects, the latter even past the usual  tropes about harems.  He’s a caricature, sure, but only of real men with real power, to this day.

Esther and Mordechai emerge victorious at the end of the Megillah, either because they outmaneuvered Haman, or were lucky or divinely guarded, or all of the above. But there’s something unsettling about ending up on top with a man who cycles through his inner circle faster than kings on Game of Thrones.

Welp, Chag Sameach. Maybe next year try making up a new sound effect for Achashverosh’s name during the Megillah reading. I’m thinking of yelling, “DOWN WITH THE PATRIARCHY!”