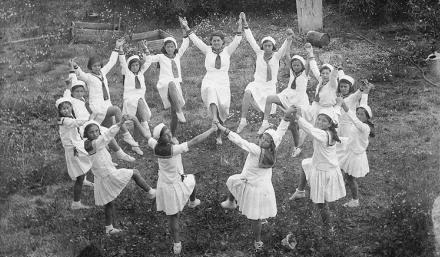 Today is the fifteenth day of Av, a day with very little significance. There aren’t any miracles that are supposed to have happened on this day, it’s not mentioned in the Torah, or anywhere else in the Bible. The first mention of Tu B’Av comes in the Mishna, where it’s written in the fourth chapter of Taanit:

Rabban Shimon Ben Gamliel said: There are no better days for Israel than the fifteenth of Av and Yom Kippur, because on those day the daughters of Jerusalem went out in white garments…and danced in the vineyards. What did they say? They said, “Young man, raise your eyes and look at what is clear to you. Don’t look at her form, look at her family [i.e. her family’s good standing in the community].”

Maybe this doesn’t turn you on, but the fifteenth of Av has been appropriated as a kind of Israeli Valentine’s Day with the giving of flowers, chocolates, and probably lingerie, too. Here’s myjewishlearning.com:

In recent decades Israeli civil culture promotes festivals of singing and dancing on the night of Tu B’Av. The entertainment and beauty industries work overtime on this date. It has no formal legal status as a holiday– it is a regular workday–nor has the Israeli rabbinate initiated any addition to the liturgy or called for the introduction of any ancient religious practices. The cultural gap between Israeli secular society and the Orthodox rabbinate makes it unlikely that these two will find a common denominator in the celebration of this ancient/modern holiday in the foreseeable future.

Tamar Fox has an MFA from Vanderbilt University in Nashville, but she still doesn't like sweet tea. Born and raised in Chicago, she's also lived in Iowa City, Dublin, Oxford, and Jerusalem. When she's not rocking out at honky tonks she teaches text study, cooks elaborate meals, and volunteers for a hospice. When she grows up she wants to be a professional whiskey taster.