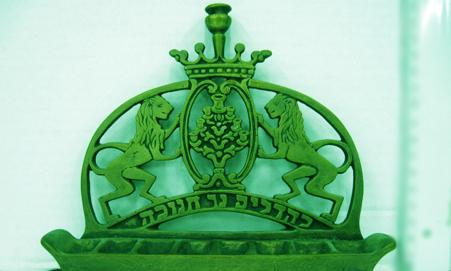 When I told people that I planned to spend the 2012-13 academic year in Ukraine, their most common response was: “Why?” (Followed closely by: “Is that safe?”) It seemed to me, at the time, that the most frequently asked questions are often also the hardest to answer. Although I came up with several canned responses—a craving for gritty post-Soviet adventures; a desire to get to know the country my grandparents came from better; to study Jewish history; because I lucked into a Fulbright scholarship to go there—I couldn’t help but feel that none of them sufficed, at least not alone. It could only be some combination of all of them that came together to make a kind of electric unease, a pull eastward that kept me sleepless before I boarded the plane to Kiev.

It’s been two months since I got here, and though I’m thrilled to see the Dnieper River through my window each morning, Ukraine is the kind of place that raises more questions than it answers. Though Ukraine’s contemporary Jewish community is thriving in Dniepropetrovsk, Odessa, and elsewhere, it’s far from the world my grandparents inhabited, changed by a century of Soviet atheism and mass emigration. Studying the culture of prewar Jewish Eastern Europe can sometimes feel like studying Ancient Rome; although only half a century has passed, the combative, complex, multilingual civilization that overran Kiev’s Podolia neighborhood and Odessa’s wharfs, the squares of Chernivtsi and Muncaksy and Lviv, is gone, its residents with it.

Part of that world lives on in the many novels and poems it inspired. Part of it lives on in my own Jewish upbringing and that of people like me—cold borscht and potatoes with sour cream on Pesach, Yiddish leaving its unmistakable footprints all over my English speech. And some things remain, even here in Ukraine. But you have to look for those signs, scour the streets, find the people who can still tell you about the past, though there are fewer every day. Being here for a year, through all the Jewish holidays—from Rosh Hashanah to Hanukkah to Pesach—I’ve been teaching myself to look and to listen, although it can be exhausting. But sometimes the past shows itself in unexpected, unlooked-for ways, and, for a wayward moment, a lost world of unimaginable richness comes alive again.

A few weeks ago, I took a trip to Lviv, a city once home to a world-famous Jewish community. Lviv is beautiful, in a delicate, markedly Western-European way that differs from other Ukrainian cities. My friends I went for a walk one late autumn afternoon, watching yellow sunlight fade over pastel houses. When we reached Federova Street, where the sellers of books and antiquities gather, we stopped to peruse their wares—cheap novels, schoolbooks, Soviet hatpins. And then I saw it: on the low table beside a vendor in his mid-30s—who glowered at us, crossing his arms—was a menorah.

Wrapped in brown paper, the menorah lay on its side on the table. The metal was oxidized green with age, but beneath the patina, the Hebrew words lehadlik ner Hanukkah could be made out—to light the Hanukkah candles, the blessing you make before lighting the candles. A lion—symbol of the city of Lviv—reared on spindly legs in its center, holding up the shamash, and a row of oil wells held the remains of charred, degraded wicks. The vendor set his jaw and prepared for a long haggle. I opened my wallet, but to my dismay, I only had a few bedraggled hryvnia (the Ukrainian currency) with me. I had to leave without the menorah—and by the time I managed to find an ATM, the market was closed, the tables packed away. I hadn’t even caught the vendor’s name.

I left the city that weekend feeling like I’d left a friend in captivity. Weeks after my return to Kiev, the menorah still haunted me. Who was it taken from? Who last lit it, and when? The spindly lion, the bent shamash, returned to me again and again. So when I returned to Lviv on a rainy weekend, I knew I had to try my hardest to find it. Hanukkah, after all, was less than a month away.

Federova Square is a sad sight in the rain—the book market is driven away in inclement weather, and it has a typically Ukrainian lack of backup plan. But my train was leaving the next day, and I couldn’t go back to Kiev empty-handed. So I set out on an unlikely quest. After asking a few passersby about the book market, I was directed to an antikvariat (antiques) store not far away. The street the shop was on was little better than a pit, and my shoes were soon covered in mud. I ducked into the shop—Lviv is full of antiques stores, because armies and vanished populations have left wave after wave of historical junk here—and asked whether they had any Jewish objects.

No dice in shop No. 1; he sent me further down the street to yet another antiques store. In shop No. 2, there was a Vilna-printed copy of Vayikra (Leviticus)—nestled next to a copy of Mein Kampf. In the third antiques store were only icons, flat-faced saints that stared at me from behind glass cabinets.

I was exhausted, and chilled to the bone. But the rain had abated and I wasn’t about to give up my search yet. There was one more place to check—the Vernisazh, Lviv’s bustling outdoor souvenir market. I passed piles of wet woolen mittens, wood rosaries, matrioshka dolls; the vendors were on the verge of packing up their things. I paused at the flap of a dim tent, my well-rehearsed query—Do you have any Jewish objects?—on the tip of my tongue, when I saw it. Nestled between a Soviet aviator cap and a pair of spectacles, there it was—the twin of my menorah, down to the green oxide speckling the base of the shamash. The lion grinned at me with bared teeth, his thin paw braced against the frame, and there were the Hebrew letters instructing me “to light the Hanukkah candles.”

When I indicated that I wanted it—and I was ready to pay his inflated price—the vendor dug a yellowed envelope out from under his riot of objects.

“This was sold to me by the same man,” he said, pressing a photograph into my hand. “I don’t know who they are—but they’re Jews, and this photo is from Lviv, before the war.”

In the photo, its image still crisp in black and white, a young boy in the familiar Eastern European keppele (cap) stood next to a bearded man in a broad-brimmed black hat. The two of them held hand-rolled cigarettes, and smoke curled out of their open mouths—the camera had caught them in the middle of a bout of laughter. There was no date on the photograph, no name, and the menorah’s creator hadn’t signed his handiwork. But the menorah was heavy and solid in my hand, the photograph was clear and whole; I could imagine the same hands that held those cigarettes lighting the wicks in the menorah’s wells, the same smoke curling up around the high-cheekboned faces, the blessing escaping from beneath the bushy beard.

I kept the menorah and the photograph in my lap all through the train ride back to Kiev. And as the days grow shorter, as snow begins to accumulate on the statues’ shoulders, I’m waiting for the day when I get to light these candles. I’ll look out over the little houses crowding Dnieper’s banks, over the dancing flames, and know that this is why I came—even if only for an hour, even if only in the privacy of my own room, being here has given me the chance to light up a piece of the past once more, and let it shine anew on the weary streets of this city.

Talia Lavin is a recent Harvard graduate and aspiring novelist. She is currently on a Fulbright grant in Ukraine, where she hopes to get used to pickled herring, pelmeni, and pit toilets. You can read more about her Ukrainian (mis)adventures here.