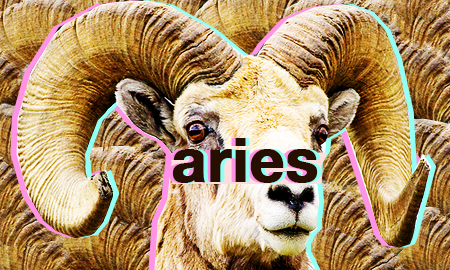 The Aries ram finds its place in Jewish history as an instrument of salvation—instead of sacrificing his son Isaac, Abraham sacrificed a ram in Isaac’s place. The rebirth of the sun is also an important Aries myth, and its symbolism of renewal is inherent to the story of Passover, which is determined by the spring equinox, signaling our release from winter’s bondage.

Aries, a cardinal fire sign, is the first sign of the zodiac, and, as the head of the year, it rules the head and face. Therefore, you are the most forward-looking and self-assertive sign of the zodiac. Ruled by Warrior Mars (the planet named after the Roman god of war), Aries are often impetuous, reckless, and above all, action-oriented. Exceedingly ambitious, headstrong, and impulsive, you’re always full of new schemes and ideas. But Aries can also be a bit combative at times—prone to extremes and to jealousy. Nevertheless, your quiet time is just as crucial to your well-being—you need to recharge your batteries even more than the rest of us!

Aries are all about truth, and are never at a loss for the right word. Your dynamic directness must be softened by humor and charm, though, which you have in spades. You are all about action, starting new things and getting them done. While your mantra may be ‘No guts no glory,’ keep in mind that your opponents have bring their own strengths to the table. Do your best to avoid being perceived as a loose cannon: Mit rugzeh fort men nit veit (with anger you don’t get too far).

TAURUS (APRIL 21-MAY 20): Your mind, body and spirit fuse this month, giving you insight into the deepest reaches of your character. You’ll slow down to your preferred laidik-gaier (idler, loafer) state-of-being when Venus enters its home sign, Taurus, April 15 to May 9.

GEMINI (MAY 21-JUNE 20): With your ruling planet Mercury finally direct, and transiting through opportunistic Aries, from April 13 to May 1, you’ll have plenty of chances to increase your popularity—if such a thing is even possible! Zhu met (mir) in kop—the buzzing in your mind—is amplified by Aries, a fire sign, which implores you to move impulsively from one thing to the next. Take a deep breath—and don’t quit your day job.

CANCER (JUNE 21-JULY 20): Long time no see, you lobbus (little monster). While you’re most comfortable nesting at home, you will be confronted by more professional responsibilities in the coming weeks. With the new moon in Aries on April 10, however, you are encouraged to face your sheidim (demons), get out into the world and try something different.

LEO (JULY 21-AUGUST 20): Wild hearts can’t be broken, but your current hartsvaitik (heartache) is the sneaking suspicion that your skills aren’t being used effectively. If you’re just waiting around for someone to take notice, you could be waiting forever. Be true to your bad self and have confidence that your work will speak for itself. In the meantime, perhaps a vacation is in order? Travel in good health (for gesunterhait), you menschy monarchs.

VIRGO (AUGUST 21-SEPTEMBER 20): While industrious Virgos have the reputation of being kuni leml (a nerd), try to cut loose a bit this month. This doesn’t mean you have to compromise your values or sense of tznius (modesty). A gentleman doesn’t ask and a lady doesn’t tell, but with your ruling planet Mercury direct and in fiery, impulsive Aries, you’ll want to shout your Virgo verve from the rooftops!

LIBRA (SEPTEMBER 21-OCTOBER 20): When Venus enters her home sign, Taurus, from April 15 to May 9, you’ll want to indulge in the finer things. However, you may feel compelled to clean up the shudden (big mess) you’ve made of your love life. Love is a naidlechech (rare thing), and you don’t want it to slip through your fingers. Perhaps it’s time to take a page from Libra Nanny Fine’s book: “It don’t mean a thing if you ain’t got that ring.”

SCORPIO (OCTOBER 21-NOVEMBER 20): Scorpios live by the credo di beste rede iz di vos men halt nit—the best speech is the one you don’t make. But with your ruling planet Pluto retrograde from April 12 to September 20, your power struggles and their attendant pressures should begin to ease. Your passions and desires—as well as your temper—could reach their breaking point. But don’t worry: what happens in Scorpio stays in Scorpio.

SAGITTARIUS (NOVEMBER 21-DECEMBER 20): As the great Sagittarian nebbish Woody Allen once said, “If you’re not failing every now and again, it’s a sign you’re not doing anything very innovative.” This month, stars are aligning to get you up and out there—take some risks already! Sagittarians have, if nothing else, an open mind. Remain true to your inquisitive self and remember: az me fregt, blonzhet men nisht (if one asks, one does not err).

CAPRICORN (DECEMBER 21-JANUARY 20): Stuck in the middle of your ruling planet Saturn’s retrograde period, resolving old issues has forced you to take a long, hard at your truest self. If it seems to you that the more things change the more they stay the same, maybe it’s time to really shake things up once and for all—folg mikh a gayng! (that’s no small task!). Finding a balance between home and work is a Capricorn’s eternal struggle.

AQUARIUS (JANUARY 21-FEBRUARY 20): Aquarians tend to keep their emotions bottled up, which always leads to trouble. Tsum shtain zol men klogen nor nit bei zich zol men trogen—better pour out your troubles to a stone, but don’t carry them within yourself. Opening up to others allows you to appreciate the variety of perspectives that may come your way. While aleyn iz di neshome reyn—being single has its advantages; lit., alone, one’s soul is pure—it is through your relationships with others than you’ll learn something valuable about yourself.

PISCES (FEBRUARY 21-MARCH 20): Planets moving out of your sign this month may appear to darken your doorstep, but di tseit brengt vunden un hailt vunden—time brings wounds and heals them. With all of the pressures of the last few years, you feel like you’ve lost the courage of your conviction—and the confidence you need to make the right choices. Get the money, honey; and zei nit kain vyzoso!—don’t be an idiot!—ask for help if you need it.