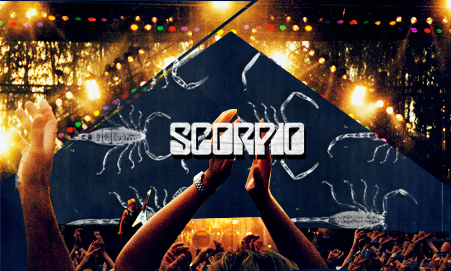 Ancient Hebrews knew Scorpio as Lesath (Lesha), the perverse. The fixed water sign, Scorpio is the most misunderstood of all the signs. A natural detective, you’re the sign of intensity. Ruled by the stinging scorpion and the majestic eagle, Scorpios are capable of the highest highs and lowest lows—this sign has more extremes than any other.

You are a secret force of nature, best known for your seething magnetism, passion, and mystery. At best, you are quick in critical thought, perceptive, and able to sense the moods and thoughts of others. At worst, you are uncompromising and exacting, suspicious, cruel—as stubborn as the other fixed signs but with a vindictiveness that can spell danger.

Magnetic Scorpio is a sign of attachment. Your feelings of attraction and repulsion are pronounced. But make an effort to be more open; at a distance you fool others, close at hand just yourself—Fun vaytn nart men laytn, fun neont zikh aleyn—it will also reduce miscommunications

Saturn will remain in Scorpio until September 19, 2015. During this time, make an effort to relinquish bad habits. The Taurus full moon on October 29 illuminates relationships, reflecting your emotions back to you and helping you realize the root of your passions. Just in time for Halloween, you devils. Your self-awareness shines through with the new moon solar eclipse in your sign on November 13.  After the Mercury retrograde period (November 6-26), and when Neptune turns direct on November 11, you may experience some breakthroughs.

SAGITTARIUS (NOVEMBER 21-DECEMBER 20): With your ruling planet Jupiter in retrograde from October 4 to January 30, you may find yourself reminiscing about ghosts from your past. Use this time listen to what your instincts are telling you. The full moon on the 29th encourages you to sit back, relax, and put your feet up already—you deserve it!

CAPRICORN (DECEMBER 21-JANUARY 20): The full moon in Taurus, the most sensual of earth signs, urges you to put your work down and go out and play. Your ruling planet, Saturn, is in Scorpio for the next few years, encouraging you to commit to a goal and see it through to the end. Take this with a grain of salt: All work and no play make Jack a dull boy.

AQUARIUS (JANUARY 21-FEBRUARY 20): It’s either all or nothing—Oder gor oder gornisht—for you Aquarians. You may be getting cold feet about a current romantic entanglement. Go back to your roots: spending some time with family may offer clues for how you can incorporate romance into your scheme of things.

PISCES (FEBRUARY 21-MARCH 20): Your ruling planet Neptune turns direct on November 11. If you’ve been extra sensitive to the energies around you, you may find some relief when this period of intense inward-looking ends. While you may have to go against your nature and think about the practical, mundane things in life, there are ways to maintain your imagination and optimism throughout.

ARIES (MARCH 21-APRIL 20): You Aries have a tendency to put your foot in your mouth. While the headstrong schvitzer (show-off) between your ears may motivate you to achieve your goals, be careful that you don’t work so hard that you burn out. Ambition is a good thing as long as you stay grounded in reality.

TAURUS (APRIL 21- MAY 20): Languorous Tauruses don’t always strike when the iron is hot. Although you have no shortage of dreams, it takes some time for you to bring them to fruition. The full moon in your sign on October 29 cautions you to watch your boundaries with your emotions.

GEMINI (MAY 21- JUNE 20): Mercury turns retrograde from November 6 to 26, frustrating your instincts. That shouldn’t stop you from schmoozing, reading, learning, and doing your Gemini thing. Talk your heart out—Me redt zich oys dos harts—you might not get exactly what you had in mind, but when has that ever stopped you before?

CANCER (JUNE 21-JULY 20): Ruled as you are by the moon, you are particularly susceptible to full and new moons. While the full moon may create tension for you, remember that every man has a madness of his own—Itlecher mentsh hot zich zein shigoyen. The best way to face the world is head on!

LEO (JULY 21-AUGUST 20): Any sense of limitation you’ve been feeling is reaching its breaking point. Before you succumb to the pressures of reality, take a few moments to breath and assess your state of affairs. You magnetic Leos go straight to the heart of the matter—be true to yourself and go after what you really want.

VIRGO (AUGUST 21-SEPTEMBER 20): Discerning Virgos may not have a hard time seeing the forest for the trees, but with Mercury moving retrograde most of November, be careful you don’t bore your companions. A critical eye won’t necessary save you from the forces of chaos that descend upon us all from time to time.

LIBRA (SEPTEMBER 21-OCTOBER 20): Venus, your ruling planet, moves into your sign on October 28, neshomeleh (sweetheart). Libra is the sign of partnership, and you’ll find yourself becoming more aware of that special someone. But don’t take this as an excuse to neglect your own personal development—if you got it, flaunt it!