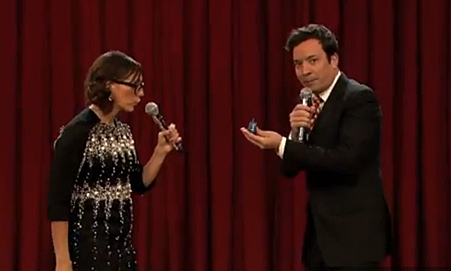 Jewcy crush Rashida Jones continued her talk show awesomeness (remember when she called out Mel Gibson for hating Jews on Andy Cohen’s Watch What Happens?) when she stopped by Late Night with Jimmy Fallon on Thanksgiving.

They sang an incredible four minute-long holiday-themed pop song parody medley, hitting all the major targets: Taylor Swift (“We are never, ever, ever wearing ugly sweaters”), Carly Rae Jepson’s “Call Me Maybe” (“Pass the Gravy”), and even the somewhat tired Gangnam Syle (“Open Eggnog Style”). Jones obviously has a secret good voice, and pulls off the whole thick-framed-glasses-with-a-dress look.

But the highlight by far was when they started whistling the tune of Flo Rida’s catchy, gross-sounding song “Blow My Whistle,” and Fallon pulls a dreidel out of his pocket. “Can you spin my dreidel baby, dreidel baby, let me know,” Fallon rasps. “Girl I know that you’re not Jewish so I’ll start real slow.” It’s weird, since Jones is Jewish, but whatever. Then she breaks it down: “Just put your fingertips together and you say Shalom,” which is definitely not how we play dreidel at my house, but again, whatever. Do your thing, Jones: