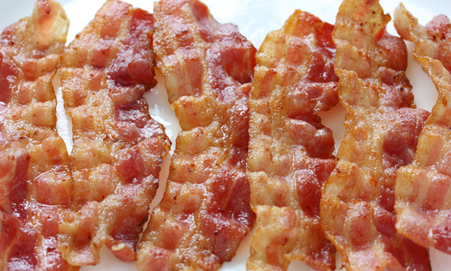 My sister and I walk into a restaurant. We sit down, look over the menu, and there it is—my personal sin, the bacon burger. The photo glistens temptingly and I surrender to it. I place my order and my sister gives me the ultimate ‘You bad, bad Jew’ expression. I know that I’m lucky to get away with just a frown from her, as it typically is accompanied by a verbal reminder that we are Jewish and shouldn’t ever eat bacon as a result. After her distaste is properly displayed, clear of conscience, my sister orders herself a plate of popcorn shrimp.

Soon the taste of my delicious bacon burger simmers in my mouth. In my mind, though, the little long-bearded, kippah-wearing angel sits solemnly on one shoulder shaking his head back and forth, while a miniature Howard Stern, in twisted rabbinical form, says on the opposite shoulder: ‘Come on! What’s the big deal? Baco-Jewish pride, man!’

My sister munches down her equally non-kosher meal not only free from self-critique or conflict, but with the knowledge that it’s highly unlikely that a random kosher squad will be patrolling what she eats. For some odd reason, it seems that, were we both to be trayf terrorists, the kosher squad would see her as only packing a hand grenade, while I’m holding the atomic bacon bomb.

At some point, though, we have to ask ourselves: Where did this outstanding anti-pork prejudice come from? Yeah, okay, it’s not kosher. But if you ask a lot of Jews today what other animals aren’t kosher, many will draw a blank.

But let’s be honest. Most of us don’t aren’t inundated with seedy back-alley images of that filthy, contaminating, $15-a-pound lobster. We don’t hear about the average Jewish parent keeping careful watch that the $90-an-ounce Siberian sturgeon caviar doesn’t get its little unscaled fishhooks inside their kids, leading them off the properly beaten kosher path.

But you eat one little slice of bacon, and boom—you’ve gone over to the dark side.

As strange as this may sound, I opted to eat bacon for health reasons. I am epileptic and, as such, I largely use the doctor-recommended ketogenic diet to maintain my body’s welfare. Of all the foods in the ketogenic diet, the one that I have found quieted petit mal seizures second best of all was bacon. Therefore, not only do I recommend giving bacon a shot, despite being a Jew, I’d even go so far as to recommend it despite being a rabbinical student.

And anyway, why are pigs so much more unclean than other non-kosher animals? Because pigs, unlike the vulture, the bat, and the weasel, decided to try and trick us. At least that’s the consensus rabbinical ruling on the subject. Technically, kosher law necessitates a cleft hoof and a chewing of cud. With most non-kosher animals, this is a fairly easy thing to assess. Just like the saying goes that you can tell everything you need to know about a person by their shoes, you can typically take a glance at the animal’s feet and know whether or not it’s kosher.

Except in the instance of the pesky pig. It’s the only animal that has a split hoof but does not chew its cud. Therefore, the pig alone has the ability to mislead the less-knowledgeable Jew into making a dinner out of it.

And what is cud chewing, incidentally? It’s the practice of vomiting food up and eating it a second time. Kosher animals, like the cow, prefer to enjoy their meals two times, not just one. This, the pig does not do. A strange fact, but it is due to spew that cows and their kosher brethren have come out spotless, while the primmer pig has become the poster child of uncleanliness in Judaism.

So what are the effects of the pig being the ultimate bad guy? Well, for one, when there’s one big bad guy, we tend to focus less on other offenders. Because of this, more Jews eat shrimp and caviar without moral quibbles, while pointing a finger at the so-called Baco-Jews. It winds up not only being a hypocritical situation, but one that has, to many, stifled true understanding of kashrut law. Were the pig not seen as so over-the-top horrible, perhaps more Jews who want to keep kosher would know to pass on shrimp, too.

Another result of vilifying the swine is that those condemning it may have actually added to its allure. In the days of prohibition, outlawing alcohol only made the public drink more. These days there are Baco-Jew stuffed animals, bumper stickers, posters, greeting cards, mouse pads, hats, and just about every other kind of available merchandise. I’ve seen T-shirts with slogans reading, “Jews for Bacon! Reform Now!” and “Citizens for Kosher Bacon!” For many, especially young people, it has become an American Jewish obsession—the love that once dared not speak its name, but now shouts it pretty loudly.

So, if we want the next generation to follow kosher law, what might be some steps we can take to better encourage that? First, knock the pig down from its unfair and shameful pedestal. We should teach that all unkosher animals are equally unkosher. The Shrimp Jew should not be allowed to mock the Baco Jew and get away with it, because so long as one is treated as a misdemeanor and the other a felony, the Jewish kitchen courtroom loses a large degree of credibility.

Let’s take the might and mystery away from bacon. Maybe it tastes good; maybe it doesn’t. But it shouldn’t be used as the symbolic embodiment of Jews Gone Wild.

Previously on Jewcy: Why Are Jews So Obsessed With Bacon?
Kosher Salt: I Don’t Eat Pork
Why I Gave Up God But Still Keep Kosher

Galina Trefil is a JSLI rabbinical student, human rights writer, and board member of the Association for American Roma.