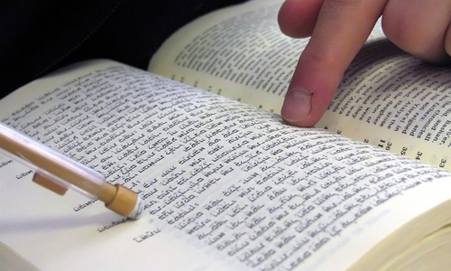 Last week, Rabbi Ari Hart, the co-founder of Uri L’Tzedek, wrote about his personal struggle with the liturgy and the recitation of the blessing thanking God “for not making me a woman,” which as a liberal sort, he finds problematic, you know, because of misogyny.

Rather than omit or amend the blessing as some Modern Orthodox folks—from Rabbi Yosef Kanefsky to Senator Joe Lieberman—have done, Hart decided on a different tactic. Citing his fidelity to Orthodoxy and the entirety of halacha, Hart does not feel comfortable changing the blessing to match his principles. Rather, he will continue to thank God for not making him a woman while keeping in mind all of the reasons that it is indeed better to be a man—from rape to the glass ceiling to lack of religious leadership opportunities (particularly in his denomination, which doesn’t allow for women rabbis) and so on. You see, it really sucks to be a woman and Hart is rabbi enough to admit his privilege.

My knee jerk reaction was to blog snarkily about Hart’s post, pointing out that what he was suggesting is akin to the oft-discussed and derided ironic hipster racism. As Jezebel’s Lindy West astutely pointed, some white folks (the ones with college degrees) seem to think that “not wanting to be racist makes it okay for them to be totally racist.” Hart is suggesting something similar—as a male, a member of the privileged group in Orthodoxy, he gets to rejigger the meaning of a blessing that has often been viewed by women as hurtful, to twist into something that he can feel good about. It’s sort of like how straight people decided that “queer” was no longer insulting and that LGBTQ should reclaim it. (Oh, wait—it didn’t happen like that?)

While I still stand behind that original blog post and the arguments contained therein (and as a very belated birthday present, I would very much like someone to make Hart a “Shelo Asani Isha” t-shirt he can wear ironically on a New York street corner while explaining his intent), I’d like to address the emotions and feelings that seem to motivate the writing of his piece. (And I think it’s totally fair to make assumptions about Hart’s inner mental state since his “strategy” demands the same of those around him—for us to hear him recite the particular blessing and infer what he’s thinking about his male privilege.)

Like many progressive Orthodox Jews, Hart is torn up about the sexism embedded in Jewish law and liturgy. But he really likes being Orthodox and doesn’t want to do anything that calls his status into question, which is a reasonable fear. When Kanefsky wrote about not saying the blessing, some considered him to have stepped outside the bounds of Orthodoxy. So Hart continues to thank God daily that he was not made a woman. And the cognitive dissonance he feels living as an Orthodox male who believes that sexism and its consequences are wrong is clearly weighing on him.

I think we can all sympathize. It’s difficult to live perfectly in accordance with one’s values. We all buy goods that are made by workers who underpaid and mistreated. Those goods are often manufactured in ways that are destructive to the physical environment. The list goes on and on.

Some may protest these unjust systems and try to change them for the better. But for those of us who don’t take to the streets to fight against oppressive institutions, I’d like to think that at least we’re not actively rationalizing and defending our actions. (This isn’t much, I’ll grant you. In fact, it’s so little, it’s practically nothing at all.)

Hart, however, is treating the blessing as a thought problem, one that can be fixed if you can simply find the right arguments. By coming up with a different way of understanding it, he seems to think the matter is put to rest at least until all of the ills he lists at the end of his post are corrected. (And what then? What happens when women are totally equal? Will the Orthodox, if that category still exists, say the blessing a hundred years from now or whenever women have achieved equality?).

His approach has been fairly typical of Orthodoxy’s encounter with feminism—at least online. Confronted with certain practices that have their roots in very misogynistic notions about women, many Orthodox men and women insist that the problem is not the law but the explanation of it. ‘No, wait! You don’t understand!’ is the sentiment that has launched a thousand apologist pieces. (This also typifies the Republican response to their thrashing in the 2012 election. They seem to think that blacks and minorities simply didn’t understand their message and platform; their new strategy is to better explain themselves to minorities. I wonder how they’ll rationalize voter ID laws.)

The problems with the blessing (and with the status of women with Orthodox Judaism in general) cannot be explained away. In a small way, “shelo asani” contributes to all of the ills that Hart opposes and even some others, like homophobia, since the blessing implies that the worst thing a man can be is feminine. It’s not just a locker room taunt—it’s written into our liturgy. We have to do better than finding a more palatable explanation.

What’s so disappointing about the Huffington Post defense of “shelo asani” is the source. Hart has made a career out of helping the poor and aiding workers, out of taking action against injustice, out of doing something.

Of course, helping those groups doesn’t fundamentally disrupt the halachic system (though it is disruptive to the capitalist system). We are supposed to perform acts of charity and treat the goy in our midst with kindness and dignity. We are not allowed to mistreat workers and deprive them of pay or even make them wait for their money. Uri L’Tzedek is not changing the legalistic status quo as much as enforcing it, which is still highly commendable and difficult work.

But when Hart is confronted with the idea of change that could be disruptive to the Orthodox status quo—addressing women’s status and treatment—he doesn’t respond with the same verve. He seems to feel powerless to do anything, even amending or omiting a blessing.

William Faulkner is rumored to have said, “In writing, you must kill all of your darlings,” referring to those exceptionally fine and funny sentences that a writer is in love with despite the fact that they are off-topic or detract from your narrative intent. The writer’s emotional attachment to a particular phrase, paragraph, or page can keep it off the chopping block.

The offending blessing is hardly a “darling,” but Hart and others are treating it as such, permitting nostalgia and the emotion the old-timey liturgy evokes to cloud their judgment.

Yet as painful as darling slaughter is for many writers, it usually improves the overall work. If writers can eliminate their favorite phrases then perhaps we can have an honest discussion about cutting deeply troubling sections of our liturgy.

Because there’s a limit to how much sympathy I can muster for progressive men like Hart who argue to retain the old, oppressive forms for reasons of nostalgia or the desire to retain membership in a certain clique.

I get it. Change is difficult and destabilizing. It can be unpleasant to tinker with traditions and prayers that are part of a lifestyle that you mostly find beautiful and meaningful. Yet to these folks I still say—get over it. Your pain, while legitimate, is minor compared to the experiences of those who have been marginalized and oppressed by thousands of years of rules and blessings that have regarded them as property, trivialized their intellectual capacity, and denied them access to power.

But even if you can’t get over it, please don’t argue your liberal bona fides even as you continue to retaining those practices and prayers that many women find damaging.

I know, I know—perhaps I should be grateful that an Orthodox rabbi is even able to acknowledge his privilege. But guess what? I’m fresh out of gold stars.

Previous columns: The Photographer Who Captured a Disturbing Domestic Violence Incident
Misogyny in Israel—and Not Just at the Western Wall
Obsessive Compulsive Passover